(CNN) -- More than 50 children have been abducted in Haiti since the beginning of the year, adding to a trend of kidnappings in countries affected by violence, according to a United Nations Children's Fund report. 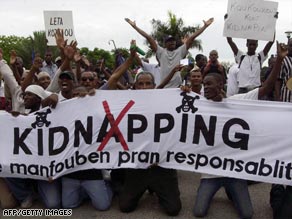 Haitians demonstrate June 4 in Port-au-Prince against the kidnappings and acts of violence in Haiti.

"It is everyone's duty to ensure children are safe from harm, and governments have a responsibility to enact and enforce measures that provide a protective environment for all children," the agency said in a statement released Friday.

In countries torn by war, like the Central African Republic, Democratic Republic of the Congo and Iraq, food shortages and poverty have added to the already hellish conditions children live in. The youngest in unstable countries have become primary targets for armed groups who see them as commodities, the agency said.

In Haiti, UNICEF and local officials report that kidnapped children are being raped, tortured and murdered. The United Nations Stabilization Mission in Haiti has been working with the national police force to try to halt such crimes. They suspect that criminal gangs are responsible.

The agency reports that as many as 2,000 children a year are trafficked to the Dominican Republic, often with their parents' support. And about 1,000 children are working as spies, messengers or soldiers for armed gangs in the Haitian capital of Port-au-Prince.

Earlier in the month, a demonstration was held in Haiti's capital after a 16-year-old hostage was murdered and other hostages had been raped and lynched, including infants, UNICEF said.

The agency recently received reports that Iraqi children have been recruited by militia and insurgent groups.

"Girls are increasingly subject to murder, kidnapping and rape, or are being abducted and trafficked within or outside Iraq for sexual exploitation," according to the report.

In the Central African Republic, the agency reports that armed gangs terrorize farms and communities, kidnapping children and holding them for ransom.

Souleimane Garga, in Paoua, recounts to UNICEF how bandits broke into his home nearly two years ago and kidnapped his wife, newborn baby and two other children -- Harouna and Beldo -- after killing older family members, including an uncle and a grandfather.

"It was two in the morning when they came. There were many of them, and they knocked down the doors," Garga tells UNICEF in a video posted on the agency's Web site. Garga was shot in the back during the attack, UNICEF said.

"They had Kalashnikovs, and the bullets came down like rain," he said.

For two years, now-5-year-old Harouna and his 7-year-old sister, Beldo, were held in bush camps because their father couldn't afford to be in a position where he might have to pay a ransom. It had financially broken him when he paid to free his wife and newborn baby, UNICEF said.

Garga tells UNICEF that the children lived in horrible conditions that included beatings. "Harouna still wakes up at night; he shouts and cries."

When someone mentions kidnapping, Beldo stops talking. "Whenever she hears that word, she stops talking; she tells us to 'keep quiet of such things' and asks for peace," her father said.

"We were afraid, but we kept thinking our father would come soon," Harouna told the agency. "'I'm happy to come back home. ... Thanks, we're free.'"

Although some children are returned to their homes, other kidnapped children may never return. They are instead used as muscle behind rebel militias in countries like the Democratic Republic of the Congo. The agency added that many children are also held in captivity and used as sexual slaves.

In a July 2006 UNICEF report on child soldiers in the nation, the agency reported that "as many as 30,000 children may be associated with armed forces or groups as fighters, sexual slaves and camp-followers."

Of those children, the report estimates, "30 to 40 percent of children associated with armed forces are girls."

All About UNICEF • Haiti • Democratic Republic of the Congo