(CNN) -- It wasn't like any Western press conference. No one interrupted the minister or the senior police officers. 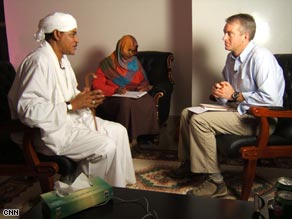 When they finished talking, a handful of journalists asked questions. Some of them were surprisingly tough, about why a local journalist had been beaten by the police, others dealing with local problems like rising traffic chaos in the capital.

Then Mai dropped a bombshell. If I asked, Interior Minister Ibrahim Mahmoud Hamid, who was giving the news conference, might agree to a private, one-on-one interview.

It wasn't exactly what I wanted just then. I wanted to get to Darfur, see the situation for myself and then come back with sharp questions.

Besides I didn't feel at my best. I was still reeling from adjusting to the extreme heat and the effects of only a couple of hours sleep. But beggars can't be choosers and the answer, of course, had to be yes, we'd take the interview ready or not.

Most surprisingly to me, the Minister agreed. Such quick and easy access to top officials is rare in any country -- in Sudan doubly so.

It was at this moment I realized we might actually get to Darfur. If the minister who effectively controlled our movement was going to talk to us at short notice, then maybe we'd get the papers we needed for travel and filming.

I might have felt less well prepared had I not had such a strong team with me: My very capable producer Sarah Sultoon, Andy Segal from CNN Present's investigative unit and cameraman Scott McWhinnie.

Now it was down to me to try to find out the truth about Darfur. Sitting in the chair just inches away from Minister Hamid, I couldn't help but think about the thousands of dead Darfurians and the fact that one of his colleagues, a former interior minister named Ahmed Haroun was wanted by the International Criminal Court for war crimes.

According to the ICC, Hamid has done nothing to bring Haroun to trial.

When I asked the Minister, he replied there were no such crimes being committed, only crimes "normal" in a case of war. I've heard this defense many times before. I always try to keep an open mind but it's hard when the facts tell you something different.

I suppose I didn't really expect him to say anything else. I wondered to myself what the point of the interview was if his testimony was less than reliable. There isn't always "another side" to every story, certainly not in the face of such overwhelming evidence of massive loss of innocent life.

But as journalists, we try to seek all views, it's part of the job. And unless we got to see Sudan's president, Hamid was likely to be the top government official we'd get to talk to. I knew I had to keep going.

Our 30-minute interview ended with officials telling us our time was up and showing the minister out of the room, but not before he'd invited us to go to Darfur. I'd got that bit on tape too, so I knew if all else failed in getting permission, we'd have some sort of trump card to play.