LONDON, England (CNN) -- The British newspaper The Guardian printed a letter Thursday from Zimbabwe's opposition leader Morgan Tsvangirai in which he denied writing a commentary printed in the paper a day earlier. 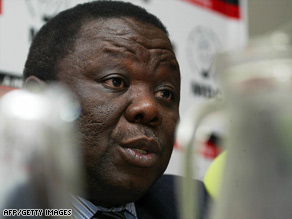 Tsvangirai: "I am not advocating for military intervention in Zimbabwe."

Tsvangirai said the commentary did not reflect his position or opinions regarding solutions to the violence and political crisis in Zimbabwe, and he emphasized that he does not advocate military intervention in his country -- a call made in Wednesday's article.

"Although The Guardian was given assurances from credible sources that I had approved the article this was not the case," he wrote in Thursday's letter.

A spokeswoman for The Guardian said the letter had been authorized by a Tsvangirai representative with whom the paper had dealt in the past, as well as Tsvangirai's representative in the Zimbabwean capital.

"The article was supplied to us and we had no reason to doubt the authenticity," said the spokeswoman, who asked not to be named.

The Wednesday editorial in The Guardian, which the paper said was penned by Tsvangirai, called for U.N. peacekeepers.

"We do not want armed conflict, but the people of Zimbabwe need the words of indignation from global leaders to be backed by the moral rectitude of military force," the editorial read.

Tsvangirai made the same call in an interview Wednesday with CNN, by phone from Harare. Asked whether he had requested peacekeepers from the United Nations, he indicated that he had.

"It's a proposal we are requesting," Tsvangirai told CNN. "It's because the violence is continuing, and it's violence that is being committed by armed forces against unarmed civilians. And all we are doing is to try to call for these peacekeepers so that normalcy can return and people can feel safe."

Thursday's letter from Tsvangirai was an apparent reversal of his call for U.N. peacekeepers.

"By way of clarification I would like to state the following: I am not advocating military intervention in Zimbabwe by the U.N. or any other organization," Tsvangirai wrote.

Tsvangirai said his party, the Movement for Democratic Change, wants an African solution to the crisis, specifically one from the 14-member Southern African Development Community (SADC).

He said he is asking the SADC and the larger African Union to lead an initiative, supported by the United Nations, to manage the transition of power.

"We are proposing that the AU facilitation team sets up a transitional period that takes into account the will of the people of Zimbabwe," he wrote.

Tsvangirai withdrew earlier this week from a presidential runoff election, scheduled for Friday, against President Robert Mugabe, citing pre-election violence that the MDC said has targeted its supporters. The U.N. Security Council unanimously condemned Zimbabwe's government for the violence.

Mugabe says the violence has targeted his own ZANU-PF party.

The Zimbabwe Electoral Commission ruled that Friday's vote would go on as scheduled despite Tsvangirai's withdrawal, although U.N. Secretary-General Ban Ki-moon and the SADC had urged a postponement.