(CNN) -- The flight down wasn't too bad, a little bumpy, but it went up and came down just fine. 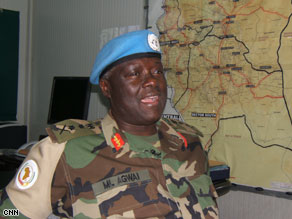 When Sarah called the local office about permission to film, she got an earful of abuse. The official wanted nothing to do with us. I wasn't too worried yet, we'd made it to Darfur and we'd be with U.N. peacekeepers, UNAMID and for the most part out of the way of government officials.

The next day the surprises began. We were in Darfur, we were with the U.N., but there was almost nothing we could shoot. It soon became clear why.

The U.N. was in virtual lockdown. It turned out that even as we were leaving Khartoum to fly down to Darfur, rebels were attacking the outskirts of the city. In news terms, we were in the wrong place.

It was immensely frustrating being in the same country as significant breaking news, but unable to get to it. We filmed what we could around the base and made the best of a bad situation by doing a few live shots with details about the attack gleaned from our sources.

My frustration began to dissipate fairly quickly the following day. I realized we might have been in the wrong place to see the attack but we were in exactly the right place to see how the Sudanese government controlled the U.N. peacekeepers. For the most part they didn't go out and their Force Commander General Martin Luther Agwai was grounded.

That morning we went to the airport to join Agwai on a flight. When we got there Sudanese officials there said the U.N. couldn't fly even though commercial aircraft were free to come and go as they needed.

It's when you stand there face-to-face with the situation and the people responsible that you see who has the power, who calls the shots. The U.N. was powerless. That was a real eye-opener, but it was still a challenge to get it across on TV. We couldn't pull the camera out and shoot the whole sequence.

The story was, the general couldn't work, and as the general was our story, if he wasn't doing anything we had nothing to shoot -- a sort of catch-22.

Fortunately cameraman Scottie is an old hand at these situations and we'd gone in prepared. I had my radio microphone, so I could leave Scottie in the vehicle shooting me while I wandered around outside and he could still pick up what I was saying. No one would be any the wiser. We sneaked in a few reports at the gates to the airport that way.

It made us feel better to be getting something in the can. The rest of the day was to be even more interesting. As we couldn't go anywhere, we were able to get more briefs and shoot a few interviews.

I was starting to learn things that were shocking me. Not least, that the U.N. had no power over the Sudanese government, but, for example, some of the female gate guards the U.N. employed were from the displacement camps.

Fair enough, I thought, until I found out their husbands were away fighting for the rebels. The U.N. was effectively freeing men to keep the war going by supporting their families.

That night when we got back to our house, I wrote of list of everything shocking I'd learned that day. I would be adding to it for the rest of my stay.

For example, rebels recruit in aid camps. Sometimes people in the camps won't let the aid workers in. And one that really caught me by surprise: The international community had been paying rebels millions of dollars to abide by a 2006 cease-fire agreement.

Many rebels had splintered their groups to get a bigger chunk of the cash. Admittedly that as over now, but Agwai saw it as one of the root causes of the increasing lawlessness. Rebels with a taste for cash turning to banditry when money handouts dried up.

It was making me realize just how complex the problems in Darfur are. I knew that I was getting far more detail than I could ever hope to fit in to the half-hour program we planned, never mind a short news story. But at the same time I felt a huge responsibility.

We'd been afforded very rare access. The name CNN helps open doors. We really needed to find out as much as we reasonably and safely could in the time available.

At times like this our unspoken contract with our audience comes to mind. We are their eyes and ears, to open a window on a situation and let them decide what they make of it. Not prejudice our reports with our own preconceptions of the story and put the camera down when we think we've got enough to call it a day based on what we thought already, but to be thorough.

In Darfur, as elsewhere, we are witnesses to history. The innocent victims here have no other voice other than ours. Only we are able to tell the world what's happening here.

When I read that back it sounds a bit pompous, high and mighty, but as our time with the peacekeepers and aid workers was to show, they walk a political and diplomatic tightrope. If they speak out about the terrible injustices they see, they risk hampering their operations, hurting supplies and help for the people they are trying to protect.

We felt for General Agwai. In the time we spent with him it's clear he's being let down by the international community.

The politics of his job -- that is, China's call at the U.N. Security Council to give Sudan an effective veto over which troops can come -- meant he was never going to get the strongest force the world could supply. But then, like him, I was left wondering despite that huge set back why then couldn't he get a single one of the 24 helicopters he'd been promised.

I can't tell you the private conversations we had but they left me feeling a man with very good intentions is having the toughest time of his life. I certainly didn't envy him his job.