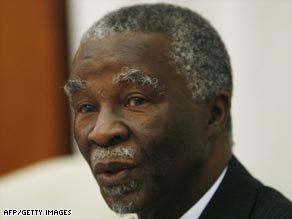 South African President Thabo Mbeki says outside intervention is not needed in Zimbabwe.

Mbeki -- appointed by the Southern African Development Community last year to mediate between Mugabe and the opposition -- met in Harare with the Zimbabwean president and members of a faction of the Movement for Democratic Change.

The party split in 2005. The other MDC, that of former presidential candidate Morgan Tsvangirai, said it turned down an invitation to attend the meeting.

Mugabe handily won the June 27 runoff election against Tsvangirai, who had dropped out of the race several days before, citing violence, intimidation and vote rigging.

Despite Tsvangirai's withdrawal, his name remained on the ballot because election officials said it was too late to remove it.

The election was roundly condemned internationally as a sham, although some African leaders were slow to criticize Mugabe.

The African Union leaders at a summit in Sharm el-Sheikh, Egypt, on Tuesday issued a resolution that urged dialogue between Tsvangirai's MDC party and Mugabe to solve the election crisis.

Tsvangirai thanked the leaders for the resolution, but said it did not go far enough.

He added, "The conditions prevailing in Zimbabwe today are not conducive to negotiations."

As the official SADC mediator, Mbeki also has come under criticism for taking a softer stance on Mugabe.

The South African president has said a more conciliatory position would allow for the formation of a coalition government between Mugabe's Zimbabwe African National Union-Patriotic Front and Tsvangirai's MDC.

The MDC has said the June 27 runoff election "exterminated" a chance at a coalition government.

"The MDC pursued dialogue in a bid to establish a Government of National Healing before the 12th [of] June, 2008," the party said in a statement released this week, refuting a report that said Mbeki's envoys had secured commitments from Tsvangirai and Mugabe on a power-sharing deal.

An MDC statement refuted the report, saying there were "no talks or discussions" between Tsvangirai and Mugabe.

"And most importantly, there is no agreement in the offing," the statement said. "Nothing can be as malicious and as further from the truth."

The runoff resulted in many accusations of fraud. A video published on The Guardian newspaper Web site Saturday reportedly was secretly recorded by a Zimbabwean prison guard. It appears to show evidence of vote-rigging.

The footage was shot with a secret camera provided by the newspaper. The paper said the guard worked for the prison system for 13 years but has since fled the country with his family.

The video shows the guard being summoned along with other prison guards to an office at Harare's central jail days before the runoff vote.

Once there, a supporter of Mugabe's ZANU-PF party instructs the guards to vote by postal ballot while he watches. The ZANU-PF supporter takes careful note of the guards' ballot numbers and which candidate they vote for, and even helps a guard properly fold his ballot and put it inside the envelope.

Watch video of the meeting »

"The atmosphere in the room seems benign, but it's deceptive," the voiceover says, adding that the ZANU-PF supporter "has the power to condemn them as MDC supporters."

Allegations of vote-rigging in the election are not new, but evidence of it has been rare. The Guardian said the video is believed to be the first footage of vote-rigging from the Zimbabwean election.

According to the paper, the guard made the film to draw further attention to violence and corruption in Zimbabwe. He initially wanted to secretly chronicle life inside Zimbabwe's jails, but kept filming when he found himself present for the postal voting, the paper said.

He also filmed a compulsory meeting at the jail at which top prison officers instructed the guards whom to vote for, the paper said.

As the guards sit in rows of chairs, a man at the front of the room says, "Forward with ZANU-PF! Down with MDC!" Later on, the man says, "Tsvangirai, even if you vote for him, even if he wins, he will never rule this country."

Asked about the Zimbabwe video, White House spokesman Tony Fratto said, "There should be no question in anyone's mind that Mugabe was not elected by the people.

"He used corruption, intimidation, and violence to keep this election from being free and fair, as the evidence seems to show every day. The international community should stand together in recognizing that the election was a sham, and Mugabe is not the legitimate leader of Zimbabwe."

Mugabe has come under harsh international criticism for the election-related violence. The African Union this week stopped short of condemning him, but urged dialogue between Mugabe and Tsvangirai.

A draft resolution before the U.N. Security Council would impose U.N. sanctions on Mugabe and 11 senior members of his government.

The sanctions would impose a travel ban on Mugabe and the others, would freeze many of their assets, and would impose an international arms embargo on the regime.

The draft, circulated by the United States this week, expresses deep concern at voting irregularities, violence, and intimidation ahead of the runoff vote that it said made free and fair elections impossible.