KHARTOUM, Sudan (CNN) -- Facing a possible arrest warrant for genocide, Sudanese President Omar Hassan al-Bashir got a show of support Sunday as he arrived for an emergency meeting of his cabinet. 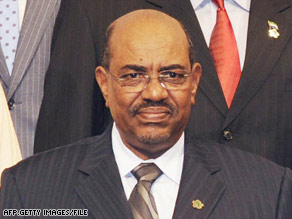 Al-Bashir would be the first sitting president indicted by ICC for genocide.

A crowd of about 2,000 people, some chanting "Down, down, USA," greeted the president with rousing cheers when he appeared on his way to the council of ministers meeting.

The chief prosecutor of the International Criminal Court may seek an arrest warrant for al-Bashir on Monday, charging him with genocide for a five-year campaign of violence in the country's Darfur region, the Sudanese ambassador to the United Nations told CNN Friday.

The warrant from Chief Prosecutor Luis Moreno-Ocampo would make al-Bashir the first sitting president to be indicted by the ICC for genocide.

"We have been hearing that this prosecutor is going to announce some names, possibly the leadership of the country, that will be indicted," said Sudanese Ambassador Adbalmahmood Abdalhaleem Mohamad. "It is a criminal move that should be resisted by all."

Watch how UNICEF is trying to prevent rape in Darfur »

When he saw the crowd Sunday, al-Bashir climbed onto a pickup truck and pumped his fist in the air, whipping the group into a frenzy.

Some held signs saying, "You are joking... Ocamp-who?" and "Death to America."

A high-ranking ambassador at the presidential palace called the possible prosecution stupid and malicious, and warned that the Sudanese people would see it as proof of a larger conspiracy against the country.

Mohamad said such a prosecution would be a destabilizing move that would "take us back to square one." Sudan, he said, was "condemning it in the strongest possible terms" and urging the international community to do likewise. "We will resist it by all possible legal means," he said.

"Definitely, the rebels will try to capitalize on this," the official said. "No one will talk about the peace process anymore.

"What do you expect the rebels to say if the president is indicted? [They] will say, 'Let us see what happens before we enter into any serious negotiations,'" the official added. "So it produces a stalemate."

Moreno-Ocampo has scheduled a news conference Monday, just after he is expected to have filed the warrant with the court.

Watch how some are concerned by the move »

The alleged crimes stem from a brutal counter-insurgency campaign the Sudanese government conducted after rebels began an uprising in Sudan's western Darfur region in 2003. The United States has characterized the campaign as genocide.

The authorities armed and cooperated with Arab militias that went from village to village in Darfur killing, torturing and raping residents there, according to the U.N., western governments and human rights organizations. The militias targeted civilian members of tribes from which the rebels draw strength.

About 300,000 people have died in Darfur, the U.N. estimates, and 2.5 million have been forced from their homes.

The prosecutor said in a progress report last month to the Security Council that Sudan's "whole state apparatus" had been mobilized "to plan, commit, and cover up crimes" in Darfur.

Meanwhile, the chief U.N. humanitarian coordinator said aid workers are preparing for the effects of such an indictment.

"We are taking precautions to make sure that people are aware of the risks and what we need to maintain our operations at the same time," said John Holmes.