(CNN) -- Nelson Mandela, anti-apartheid icon, Nobel peace laureate and South Africa's first black president, celebrated his 90th birthday Friday by doing something he had indicated he would not do again -- grant an interview to journalists. 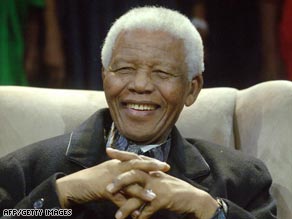 A cheerful-looking Mandela welcomed CNN's Robyn Curnow, along with reporters from two other organizations, into the sitting room of his home in Qunu, a small village in the rolling hills of South Africa's eastern Cape region where he grew up.

"What day is this?" Mandela joked, pretending not to realize it was his birthday.

He used a smile to dodge Curnow's first question of what was his favorite memory from his long life. He did say he was very happy to have lived to be 90.

Mandela credited his longevity to the way he conducted his life. He is known to be disciplined with his diet and exercise.

Asked if, in hindsight, he wishes he had spent more time with his family, he answered yes.

Graca Machel, whom he married on his 80th birthday, sat nearby and Mandela was surrounded by grandchildren.

Watch what Mandela's grandchildren have to say »

Mandela then lamented the gap between rich and poor in South Africa.

"Poverty still grips our people. If you're poor, you're not likely to live for long," he said.

This was Mandela's first meeting with reporters since he announced in 2004 that he would give no more interviews. While he stayed out of the spotlight over the last four years, he has stayed busy with his charitable causes.

All week residents of Qunu, 600 miles south of Johannesburg, have been making preparations for the celebrations. Events planned include a soccer festival, a pop concert and lunch for 500 politicians, veterans of the anti-apartheid struggle and other guests at his home Saturday.

An exhibition of letters that children wrote to Mandela and the late U.S. civil rights campaigner Rosa Parks will be displayed at the Nelson Mandela Museum, a short distance from his house.

"We are very excited," local school principal Mpondomise Ndzambo told the Associated Press, sitting in his office beneath a photograph of the former president. "Usually these celebrations are done in Johannesburg, so this is a way of being part of it." Send your birthday messages

As South Africa's first black president -- he only ran for one term -- Mandela ushered in a democratic, multiracial society that is still going strong.

In a fitting tribute de Klerk described Mandela as "one of the greatest figures of the 20th century," AP reported.

Mandela's recent birthday tribute concert in London's Hyde Park marked the 20 year anniversary of the Free Mandela event that was held in the same city to demand his release from prison.

During the concert a frail Mandela told cheering fans, "Your voices carried across the water to inspire us in our prison cells far away. Tonight, we can stand before you free.

Proceeds from the London concert went toward the 46664 Campaign, which Mandela founded in 2003 to raise awareness about the impact of AIDS, especially in Africa, and to promote HIV-prevention measures around the world.

All About South Africa • Nelson Mandela • HIV and AIDS