(CNN) -- Pirates hijacked three ships off the coast of Somalia on Thursday in the "worst number of attacks" in one day in many years, an international maritime watchdog said. 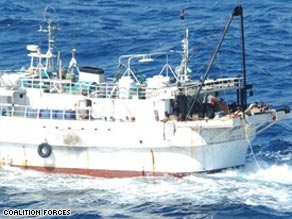 An image of the Burum Ocean -- a suspected pirate mother ship in the Gulf of Aden.

"Four attacks in two days, ships being hijacked and crews being taken, and large ransoms being demanded is completely unacceptable," said Capt. Pottengal Mukudan of the International Maritime Bureau, which monitors shipping crime.

They hijacked a ship operating under a Japanese flag a few minutes later, he said.

A German ship was hijacked about 8 a.m. local time, Mukudan said. He said the pirates are still on board the German vessel, but he had few details.

Pirate attacks are frequent in the waters off Somalia, a notoriously unsafe area for unescorted vessels. Canada announced this month that it was dispatching a warship to the area to protect U.N. aid ships after more than two dozen reported pirate attacks in the region this year.

"This is the worst number of attacks that we have seen in a short period of time for years," Mukudan said, calling on CTF-150 to "give piracy a much higher priority to bring this under control. There have been seven vessels [hijacked] since the 20th of July."

Thursday's spate of attacks in the Gulf of Aden came two days after pirates boarded a Malaysian tanker off the coast of Somalia. They continue to hold it, Chong said.

The IMB monitors shipping crime and reported Thursday's incidents to CTF-150, which is based in Djibouti, and the task force is "monitoring the situation," Mukudan said.

"They have some of their vessels ,which are tracking some of these hijacked ships, but the problem is it's very difficult to take action once the hijackers are on board," he said. "The lives of the hostages is at risk."

He said he understood that the task force was busy with the wars in Iraq and Afghanistan but noted that the IMB would like to see the task force do more to respond to the problem before the hijackings occur.

The IMB said in April that 49 pirate attacks on ships were reported in the first three months of 2008, compared with 41 for the same period last year. It recorded 263 pirates attacks last year, up from 239 the year before and the first increase in three years.