(CNN) -- The United Nations has sent police and military patrols to a camp in western Sudan after reports fighting there killed civilians, a U.N. spokesman said Tuesday. 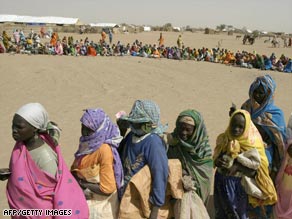 A file photo of refugees queuing for food in the Kalma camp in western Sudan.

Aid groups have started evacuating wounded from the Kalma camp, home to 80,000 internally displaced people in the Darfur region of western Sudan.

The U.N. said it received reports that Sudanese police vehicles surrounded the camp and that civilians were killed Monday during subsequent attacks inside the camp.

The U.N. African Union Mission in Darfur "is extremely concerned by this serious incident [and the] circumstances will be investigated," the mission said in a statement. "It is closely monitoring the situation and [calls] on all parties to exercise restraint."

A spokesman for the mission, Noureddine Nezni, said Tuesday the Dutch wing of Medecins Sans Frontieres had evacuated 47 wounded people who were being treated at a nearby hospital. Some of them -- mostly young men -- refused to be evacuated for fear of being arrested for having participated in the fighting, Nezni said.

Nezni would not say how many people were killed in the Monday attacks.

"There are many figures being thrown around and we hesitate to give any numbers before we are sure," he said. "We are still checking and hopefully we will have the correct figure late today."

The Sudanese government said it entered the camp to look for "huge quantities of arms and criminals," Nezni said.

The U.N. African Union Mission in Darfur said it sent police and military patrols to Kalma to confirm the details of the incident and provide assistance. Nezni added that the mission and some aid groups were in talks with refugees at the camp to find a lasting solution to the problems.

Fighting has displaced more than two million Sudanese -- and more than 238,000 refugees live in camps across the border in eastern Chad, the U.N. says.

They have been displaced by fighting that broke out in 2003, when rebels began an uprising in Darfur and the government launched a brutal counter-insurgency campaign.

The Sudanese authorities armed and cooperated with Arab militias that went from village to village in Darfur, killing, torturing and raping residents there, according to the U.N., Western governments and human rights organizations. The militias targeted civilian members of tribes from which the rebels draw strength.

In the past five years, an estimated 300,000 people have been killed through direct combat, disease, or malnutrition, the U.N. says. Another 2.7 million people have been forced to flee their homes because of fighting among rebels, government forces, and allied Janjaweed militias.

The chief prosecutor of the International Criminal Court filed genocide charges against Sudanese President Omar Hassan al-Bashir last month for the campaign of violence in Darfur.