HARARE, Zimbabwe (CNN) -- Opposition members booed and heckled Zimbabwean President Robert Mugabe as he spoke at the opening of the country's parliament Tuesday, making clear they do not recognize his legitimacy. 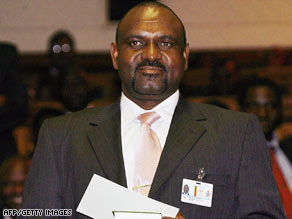 As Mugabe delivered his speech, which was carried live on television, members of the Movement for Democratic Change drowned him out with their singing, chanting, and clapping.

Mugabe opened the session a day after Zimbabwean lawmakers narrowly voted to elect an MDC member as speaker of the parliament, the first time in Zimbabwe's history that an opposition lawmaker has held the position.

The speaker of the parliament is the fourth most powerful post in the country.

Lovemore Moyo, the MDC's national chairman, received 110 votes while his only opponent, Paul Themba-Nyathi, received 98 votes. Themba-Nyathi represented a splinter MDC faction but had the support of Mugabe's ZANU-PF party.

MDC leader Morgan Tsvangirai, who was locked in a bitter presidential contest with Mugabe, had objected to Mugabe's decision to convene parliament, saying it could "decapitate" power-sharing talks that have been on hold for the past two weeks.

Watch more on the parliament's opening »

"We attended to protect the fundamental (integrity) of our parliament, and to show that we now control the parliament," Biti told CNN, adding that both sides have an obligation to continue negotiations and reach a settlement.

Mugabe's speech Tuesday was conciliatory at times and mentioned the power-sharing talks going on between him and MDC leader Morgan Tsvangirai.

The talks have stalled and there is no indication when they will restart, but Mugabe said the parties have reached a landmark agreement which they are expected to sign soon.

Mugabe told the parliament that Zimbabweans can and will address their own problems. He also blamed sanctions and the West for Zimbabwe's tattered economy, which has rendered the Zimbabwe dollar worthless.

Two members of the main MDC party were arrested Monday as they arrived at the opening session, but they were released after a short time, according to a government spokesman.

An MDC official said the arrests were part of a government ploy to skew the voting.

A third member -- Elton Mangoma -- escaped an arrest attempt when other party members came to his rescue, MDC officials said.

ZANU-PF lost its majority in the 210-seat parliament after the March 29 election, but vote recounts and political violence have delayed the body from convening until this week.

In the lower chamber, Tsvangirai's MDC has 100 seats and ZANU-PF has 99 seats. The MDC offshoot, led by Arthur Mutambara, won 10 seats and an independent candidate won one seat.

In the upper chamber, the main MDC party has 24 seats, the splinter faction has 6, and ZANU-PF has 30. The number is expected to swell with some appointments by Mugabe.