How did Lagos become more expensive than L.A.?

LAGOS, Nigeria (CNN) -- It's very rarely African cities get compared with their flashy European counterparts, yet, when it comes to cost of living Lagos isn't just competing with its neighbors in Europe -- it's beating them. 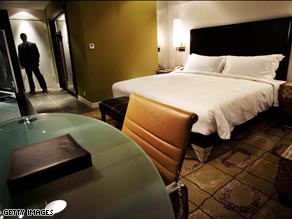 Hotel rooms in Lagos, now the 30th most expensive city in the world, now cost hundreds of dollars a night.

Nigeria's coastal economic and financial capital is the shock entry in the top 50 cities of this year's Mercer Cost of Living survey.

The vibrant home to almost eight million Nigerians beat off the likes of Barcelona, Berlin and Brussels, and even U.S. locations such as Washington and Los Angeles -- to be rated the 30th most expensive city in the world.

Its streets are now home to BMWs, its waterways play host to multi-million dollar super-yachts, and its hotel rooms fetch hundreds of dollars per night. Yes, if the Mercer survey is anything to go by this is an economic "boom-town."

But, how can a city from such a notoriously poverty-stricken region of the world rise to join this list of riches?

The answer: a mix of democracy, private investment and tourism -- according to Lagos governor, Babatunde Fashola.

Part of the city's current level of development undoubtedly rests with the growth achieved during the oil boom of the 1970s, which saw a population explosion and unrestrained economic growth.

But Fashola believes there are number of contemporary factors pushing the seventh fastest growing metropolis in the world forwards into a "truly international city."

There is a wealth of local resources which has helped the region grow, and now private sector business is becoming the major driver to financial success.

"I think [Lagos is] beginning to take its rightful place in the community of top international cities."

Fashola believes the democratic climate in Nigeria has helped the Lagos region develop by offering new-found freedom to local governments, private investors, and other independent groups.

"There's no perfect democracy. But, if you look at where we came from almost nine years ago, when you couldn't criticize government, we are better off today. Elected officials can now be held to account."

He said that the environment allowed for more robust planning between the government, individuals and the wider public.

Independent investors are helping improve local services by investing in private hospitals and schools, but Fashola admits there is still plenty of work to be done, with infrastructure still not up to the standards of other major cities around the world.

"These other cities like New York have reliable and efficient power supply 24 hours a day. We still do not have that in Lagos."

He told CNN he did not agree with Mercer's cost of living survey placing Lagos as the "30th most expensive city in the world."

"Life can not be measured like this. You can't compare Lagos with other cities across the globe and across the continent.

"You can not put them on the same scale as they do not have the same resources and infrastructure," Fashola said.

He added that Lagos is expensive compared to other parts of the country, but that was like comparing prices between "London and Milton Keynes."

"The greater the population and the greater the demand for goods, then the forces of demand and supply will push up the price," he said.

Despite this, Fashola believes the development of Lagos has not made the city unaffordable for locals. Some central city rents are said to be as high as US$6,000-$7,000 per month, but Fashola said the situation was the same in many European cities, and locals were surviving.

However, if prices are high now, there's little to suggest they will ease in the near future. Fashola said the growing number of tourists are bringing a lot of new money into the city.

"People are coming in as tourists, but tourists are also investors. They come here to do business at the same time," he said.

He believes the key to Lagos' future is catering to these groups.

"We are providing a mix of business and pleasure. A city where people can live, work and play.

"I would like it to become a truly international city, and a center of tourism and business. It has a wonderful Atlantic coastline and we need to use it," Fashola said.

If cost of living measures and growth meters are anything to go by -- Lagos is well on the way to that end.