Analysis: Mbeki's departure 'the end of an era'

JOHANNESBURG, South Africa (CNN) -- The leadership of the ruling African National Congress party in South Africa's call for President Thabo Mbeki to resign means the end of an era in South African politics. 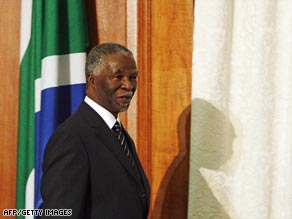 Mbeki has been South African president since 1999.

And it signals that Mbeki had lost his long-running battle against ANC leader Jacob Zuma. Since December last year, when Zuma and his allies won control at the party's annual conference in Polokwane, the writing had been on the wall for Mbeki.

But speculation over Mbeki's fate had risen to fever pitch on September 12 when Judge Chris Nicholson threw out the fraud, corruption and racketeering case against Zuma on an issue of due process.

The judgment paved the way for Zuma to become the next president of South Africa.

More significantly, the Judge Nicholson implied that there was widespread political interference in the judiciary reaching all the way to the office of the presidency.

For supporters of Zuma this was the last straw. There were immediate calls for Mbeki's head from the powerful ANC Youth League, the Communist Party and the trade union COSATU.

Mbeki and his cabinet deny accusations of political interference and are seeking legal options against the ruling. But those actions now seem too late.

Mbeki's ousting is a deeply humiliating move for the man who succeeded Nelson Mandela as the leader of South Africa's young democracy.

Mbeki joined the ANC when he was 14. But he was born into the struggle. His father, Govan Mbeki, is heralded a stalwart of the ANC and was jailed with Nelson Mandela on Robben Island for 24 years.

The urbane Mbeki was a leader of the ANC's exile wing and helped create the movement's bases in countries neighboring South Africa in the darkest days of Apartheid.

Mbeki was seen as a key to the successes of the negotiations with the Apartheid regime after Nelson Mandela was released and in the years before the first free election in 1994.

In 1999, he became the second democratically elected president of the country -- hand-picked to build on the legacy of Nelson Mandela.

As president, Mbeki is widely credited with helping the South African economy to mature and for helping broker difficult political deals across the continent (most recently last week in Zimbabwe).

But he has been heavily criticized for siding with HIV/AIDS skeptics and blamed for delays in the country's fight against the disease. And he often struggled to connect with the rank and file of the party and with average South Africans.

The ANC leadership's strategy suggests that they want to avoid immediate wholesale changes in government.

The constitution states that a vote of no confidence would require the president and the entire cabinet to quit -- a move that could plunge South Africa's government into chaos and require early elections.

If Mbeki resigns -- and his office has stated that Thabo Mbeki "has obliged" to the ANC decision -- then he could take some powerful cabinet members with him.

A spokesman of Deputy President Phumzile Mlambo-Ngcuka said Saturday that she would resign with the president. And there are other cabinet members that are seen as owing their political success to their loyalty to the president. They too could go.

How the cabinet and the ruling party handle the next few days will be a crucial test to this young democracy and its stability.

But the last week in South Africa suggests that there could be some surprises still to come in this extraordinary political power struggle.