(CNN) -- A diamond unearthed in the southern African nation of Lesotho could yield one of the largest and highest quality round polished diamonds, according to a statement Monday from company that found it. 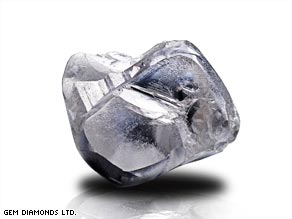 A mining company unearthed this 478-carat diamond in the southern African nation of Lesotho.

Experts in Antwerp, Belgium who analyzed the 478-carat stone determined it to be of the highest color grading available for a white diamond, said a statement from Gem Diamonds Ltd., the company that found the stone.

"What makes it more remarkable is the color and quality of this stone," said diamond consultant Neil Buxton.

"It's a D color, which is the highest possible graded color you can get, and we believe there is a chance -- a very good chance -- of getting a 100-carat plus" round stone with the highest color and clarity rankings.

The company said such a stone would "to the best of our knowledge" be "the first one in history."

Watch more on the diamond »

The diamond, which was found in September, ranks as the 20th largest rough diamond ever found, but is not the biggest ever taken from the Letseng Mine, which is co-owned by Gem Diamonds Ltd. and the Kingdom of Lesotho, a country of 2.1 million that is surrounded by South Africa.