MOSCOW, Russia (CNN) -- The Somali government has asked Russia to intervene against pirates who have seized a Ukrainian cargo ship, the Somali ambassador to Russia said Wednesday. 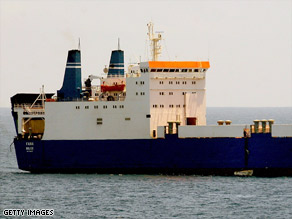 The U.S. Navy released this observance photo of the MV Faina, which is loaded with weapons and tanks.

But the Russian navy issued a statement later in the day saying it had no intention of using force against the pirates, the Russian news agency Interfax reported.

"The questions of freeing the ships and crew are being dealt with in line with the corresponding international practices," Interfax quoted Navy spokesman Igor Dygalo as saying. "For understandable reasons, the use of force would be an extreme measure because it could threaten the life of the international crew of the ship."

The pirates took over the MV Faina last week off the coast of Somalia and are demanding a $20 million ransom for the ship's cargo of 33 Soviet-made T-72 tanks, tank artillery shells, grenade launchers and small arms. The ship is anchored within Somalia's 12-mile territorial limit.

"The government and the president of Somalia are allowing the Russian naval ships to enter our waters, and fight against pirates both in the sea and on the land, that is, if they would have to chase them," Amb. Mohamed Handule said at a news conference in Moscow.

"We think that this issue of piracy has exceeded all limits. It is very dangerous that pirates are now laying their hands on arms -- not just for Somalia, not only for the navigating, but for the entire region in general," he added. "Right now, pirates are controlling the sea in this area, but just imagine if they get control of the land too."

The announcement raised concern among some officials monitoring the situation.

"We may have bad news," said Andrew Mwangura of the Kenya Seafarers Association.

Mwangura said some of the Ukrainian crew's family members are concerned for their loved ones' safety and have called him to see if he can communicate with the pirates. He urged negotiations to continue.

"For the safety of the crew members," Mwangura said, "let the ship owners talk with the pirates."

Watch Mwangura talk about the rise in pirating »

A Russian navy ship sailing toward the Faina is in the Atlantic Ocean and "still has a bit of water to get here," said U.S. Navy Lt. Stephanie Murdock, who is stationed in nearby Bahrain. "There is no estimated time of arrival yet."

The U.S. Navy has several ships in the area monitoring the situation.

"There have been no changes today," Murdock said.

The Navy has not communicated with the Russian ship but will work out coordination when it arrives, Murdock said.

The Russian ship Neustrashimy is headed to the region solely to protect Russian shipping, according to the Russian navy spokesman.

"The navy command has been stressing that the Neustrashimy, from the Baltic Sea Fleet, has been given the task of arriving in the area of Somalia and guaranteeing for a certain time the safe seafaring of Russian ships in the area with a high risk of pirate attacks. The essence of the mission is to prevent the seizure of Russian ships by pirates," Dygalo said.

Handule, the Nigerian ambassador, seemed to criticize the United States for not taking action.

"Ships of more than 10 countries are now close to our shores, but we are not satisfied with the results of their activities," he said.

Citing U.N. Security Council Resolution 1816, Handule said, "We are inviting all countries, all states who have possibility to support Somalia to fight against ... pirates. We are especially inviting Russia and giving special status to Russian warships to fight, to help Somalia."

The latest developments came two days after three pirates were killed when they started shooting at each other, according to Mwangura, the Kenya maritime official. The shootout centered on a disagreement between moderate and radical pirates aboard the ship, Mwangura said. The moderates wanted to surrender, but the radicals did not.

The pirates hijacked the ship off the coast of Somalia September 25. The Faina had been headed to the Kenyan port of Mombasa after departing from Nikolayev, Ukraine, and was seized not far from its destination.

Abdi Salan Khalif, commissioner of the coastal town of Harardhere, told CNN the pirates told a group of town elders that one crew member had died of high blood pressure problems.

Attacks by pirates have increased dramatically in the waters off Somalia's northern coast in the past year, prompting the U.S. and other coalition warships to widen their patrols in the region.

Three ships were hijacked on August 21 in that area, the "worst number of attacks" in a single day in many years, Capt. Pottengal Mukudan of the International Maritime Bureau told CNN.

After the spate of attacks, the U.S. Navy's Fifth Fleet in Bahrain announced that it would begin patrolling a newly established shipping corridor in the Gulf of Aden in an attempt to protect international shipping. Canada also sent a warship through the end of September.

The International Maritime Bureau said in April that 49 pirate attacks on ships were reported in the first three months of 2008, compared with 41 for the same period last year. It recorded 263 pirates attacks last year, up from 239 the year before and the first increase in three years.

All About U.S. Navy • Somalia • Russia