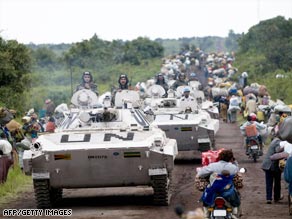 U.N. helicopter gunships, supporting national army forces on the ground, fired on rebels from the Congress for the Defense of the People in an effort to halt their advance on the village of Kibumba.

CNDP is the French acronym for National Congress for the Defense of the People, a Congolese rebel group under renegade general Laurent Nkunda.

The village of Kibumba is the location of a U.N.-administered internally displaced peoples camp, just 12 ½ miles (20 kilometers) north of the provincial capital, Goma, Bonnardeaux said.

Renewed fighting erupted Sunday when the CNDP seized a major military camp and gorilla park, according to U.N. and park officials. The U.N. brokered peace accord in the area in January.

On Monday, thousands fleeing Kibumba spurred violent demonstrations in front of the U.N. compound in Goma. The group was angry that a 17,000-person U.N. security force has been unable to protect them from renewed bouts of violence in the country, a U.N. spokesman told CNN.

A U.N. spokesman said the U.N.'s mission in Congo was "under attack" on Monday.

A mission staff member inside the U.N. compound, who did not want to give his name for security reasons, said U.N. security forces had returned fire in an attempt to disperse angry crowds near the U.N. compound. Gunshots could be heard as he spoke on the phone.

He said the attack had resulted in several deaths. U.N. officials confirmed one dead in Goma as a result of Monday's demonstrations.

The assault died down later in the day, a U.N. spokesman said, but people continued to pelt the building.

It was unclear who was attacking, but the staff member told CNN the people were from a village that had been taken over by the CNDP, a Congolese renegade group led by Gen. Laurent Nkunda that seized a major military camp and gorilla park in a renewed bout of heavy fighting Sunday.

Thousands of civilians were reportedly fleeing the fighting. Pictures from the region showed long lines of people walking along roads carrying their belongings.

Watch how refugees line roads to get away »

Soldiers who abandoned the military camp were retreating in vehicles on a main road outside of Goma on Monday, angrily honking their horns at civilians who got in their way, The Associated Press reported.

Bertrand Bisimwa, a spokesman for the rebels, told the AP that rebel fighters had moved to within 7 miles (11 kilometers) of Goma.

The latest fighting comes after the collapse on Sunday of a tenuous week-old U.N.-brokered cease-fire between rebels and government forces.

According to U.N. spokesman Nick Birnback, thousands of displaced civilians in the city of Goma were throwing rocks and Molotov cocktails, angry that a 17,000-person U.N. security force has been unable to protect them from the violence.

"The situation in Goma is very volatile," he said. "But MONUC is taking all available measures to stabilize the situation."

Watch more about the fighting »

The U.N. mission -- known by its French acronym, MONUC -- is in Goma, which is along Congo's border with Rwanda.

Although the civil war in Congo -- once known as Zaire -- officially ended in 2003, recent fighting in eastern Congo between government forces and CNDP rebels under has caused tens of thousands to flee their homes, according to U.N. spokesman Michele Bonnardeaux.

The conflict and humanitarian crisis in Congo have taken the lives of 5.4 million people since 1998, and 45,000 people die there every month, according to an International Rescue Committee report in January.

A senior U.S. State Department official said the United States is pushing hard for cooperation among Rwanda, Uganda and Congo over the situation in eastern Congo. The official said all countries, especially Congo and Rwanda, "need to work together" to rein in "militia groups and other negative forces."

Assistant U.S. Secretary of State Jendayi Frazer will travel to Congo and Rwanda to urge both governments to take action, the official said.

U.N. Secretary-General Ban Ki-moon issued a statement Monday calling on all parties "to make every effort to restore calm among the affected populations."

The attacks also coincided with the resignation of the U.N. military commander in Congo, Lt. Gen. Vicente Diaz de Villegas y Herreria. A U.N. statement on Monday indicated he stepped down for "personal reasons."

All About Democratic Republic of the Congo • Goma • United Nations