HARARE, Zimbabwe (CNN) -- Political corruption in Zimbabwe threatens efforts to save millions of people from malaria in the southern African country, according to aid agency officials. 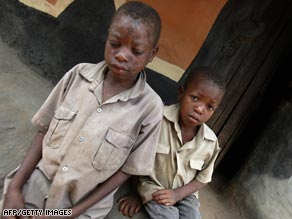 HIV-positive 13-year-old orphan Evans Mahlangu, left, and his brother Edmond, 8, had to jump Zimbabwe's border with Mozambique to get anti-retroviral drugs.

The Global Fund to Fight AIDS, Tuberculosis and Malaria has demanded that Zimbabwe's government return $7.3 million placed in the country's reserve bank to pay for the distribution medicine that can cure malaria, according to the group's spokesman.

"This could put millions of people in Zimbabwe at risk of malaria in the current malaria season," said John Linden, spokesman for the group which is a leading international financing institution for those diseases.

Linden said his group has given Zimbabwe until Thursday to repay the money or else no more aid will be sent to the country.

"At this stage we do not have confidence in the reserve bank's ability to release the money when needed, so we have demanded that all the money be released immediately," Linden said.

The money was intended to train thousands of health workers to distribute the malaria cure, medicine that is already available but sits on shelves.