(CNN) -- Zimbabwe will introduce a $1 million note this week as the country tries to ease the effects of hyperinflation, the country's central bank said Monday. 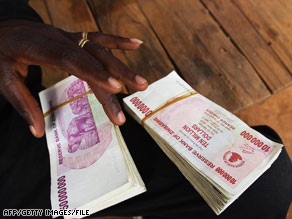 A money-changer in Mozambique holds Zimbabwean $10 million and $50 million bills in May.

In August, the highest note in the once prosperous southern African country was Z$100 billion. The country chopped off 10 zeroes, meaning the highest note was temporarily -- and briefly -- Z$10, until Zimbabwe started issuing bigger notes again.

The current highest denomination bank note is Z$50,000, not enough to buy half a loaf of bread.

Zimbabwe's currency continues to lose value as inflation gallops ahead. The official rate of inflation is 230 million percent, the world's highest, but independent analysts put the figure in billions.

"In the measures under way, the Reserve Bank [of Zimbabwe] plans to introduce a number of new, higher denominations; review the cash withdrawal limits, as well as commence aggressive campaigns for increased usage of alternative means of payment," bank governor Gideon Gono said in a statement.

Gono said the RBZ intends to introduce Z$100,000, Z$500,000 and Z$1 million (about U.S.$8) bank notes in a bid to help consumers who are battling to make simple purchases and to ease cash shortages that have been prevailing for about two years.

President Robert Mugabe's critics blame his policies for Zimbabwe's near decade of economic crisis. A power-sharing agreement between Mugabe and opposition leader Morgan Tsvangirai that was signed in September has been deadlocked over a distribution of cabinet posts. The power-sharing deal is seen as the only hope to reverse the economic crisis.

Meanwhile, the fight against a cholera outbreak in the capital city, Harare, seems to be faltering as more deaths are reported. Official statistics say 10 people have died since last week, but doctors say the disease has killed more than 30. The country is battling to raise foreign currency to import medicine.