(CNN) -- Angola has said it will send troops into the Democratic Republic of Congo, say agencies, as U.N. officials claim that Congolese soldiers have raped women, looted villages and ransacked homes in the wartorn region. 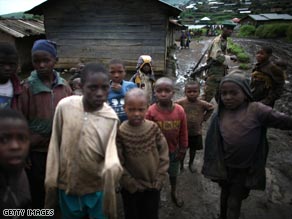 A rebel soldier looks on as children gather in Ngungu, Congo, Tuesday.

The forces would be overseen by the European Union and the Southern African Development Community, the agency reported the minister as saying.

Angolan troops last had significant involvement in Congo during the 1998-2003 conflict, which also drew in forces from Rwanda, Uganda, Namibia and Zimbabwe and left between three and four million dead following five years of fighting.

Meanwhile U.N. officials have said that the prospect of a sustained ceasefire between government troops and rebel soldiers has continued to fade after violence and looting late Monday and early Tuesday.

The attacks were followed by a near hour-long, nighttime gun battle north of the provincial capital of Goma. They U.N. officials added that it represented some of the most intense fighting since Rebel leader Gen. Laurent Nkunda declared a unilateral ceasefire on October 29.

Since then, both sides have accused the other of violating the ceasefire in smaller skirmishes that both the U.N. and Democratic Republic of Congo officials say have killed hundreds of people, including civilians.

Fighting broke out in eastern Congo at the end of August between government forces and rebels led by Nkunda. The fighting is spurred by lingering tensions over the 1994 slaughter of ethnic Tutsis by majority Hutus in neighboring Rwanda. Nkunda says his forces are fighting to defend Congolese Tutsis from Hutu militants who escaped to Congo.

The fighting has worsened an already difficult humanitarian situation. More than 250,000 people have been displaced by the conflict -- adding to roughly 800,000 already driven from their homes by past violence, the U.N. says.

The gun battle late Tuesday was in Kibati, about six miles (10 km) north of Goma.

Dietrich said the cause of the fight was unknown, but was touched off in an area where rebel and government fighters had been camped close to each other.

"We were putting some pressure on them over the last few days that they should withdraw," he said. "There are high tensions -- one small incident can trigger major fighting between the forces."

"These supplies will contain the spread of cholera and diarrhea, both extremely contagious diseases on the rise in nearly all internally displaced person settlements in North Kivu," said Pierrette Vu Thi, the agency's representative in Congo.

The United Nations also is shipping food, medicine, fresh water and other supplies into camps throughout Congo daily.

There are about 17,000 U.N. troops in Congo. On Tuesday, U.N. Secretary-General Ban Ki-moon called for an immediate ceasefire, saying as many as 100,000 refugees north of Goma have been cut off from relief workers.

Ban said he has requested the U.N. Security Council to authorize an additional 3,000 troops to help control the fighting.

All About Democratic Republic of the Congo • United Nations • Laurent Nkunda

All About Democratic Republic of the Congo • Angola