KIGALI, Rwanda (CNN) -- As leader of the Tutsi rebels in 1994, Paul Kagame pleaded with the world to stop the Rwandan genocide. 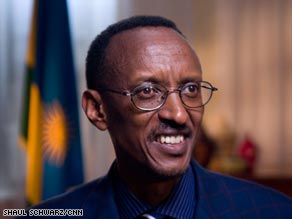 Paul Kagame: "We say every Rwandan has the same opportunity to life ... as the other."

"All along we thought that's why they were here," Kagame said, referring to the U.N. troops sent to monitor a peace agreement between the minority Tutsis and ruling Hutus.

But the nations of the world, he said, turned a deaf ear and a blind eye.

"They didn't care. They were totally indifferent. It was just another bloody African situation where just people kill each other and that's it."

After 100 days of fighting between the two ethnic groups, the Tutsi militia defeated Hutu government forces, ending the war and the genocide. But the Hutus' three-month slaughter of Tutsis left more than 800,000 dead. Today, Kagame is president of Rwanda, and he insists on reconciliation between the warring groups.

It was an incredible transformation for both Kagame and his country.

Watch as Kagame discusses Rwanda's past and future »

In the late 1950s and early '60s, Kagame's family and other Tutsis were under siege as Hutu gangs went from village to village, pillaging and killing. The Kagames, including 3-year-old Paul, fled to Uganda.

Paul Kagame would spend the next three decades as a refugee. During that time he rose through the ranks to become a senior officer in the Ugandan army. All the while, he and other refugees longed to return home to Rwanda.

In 1990, Kagame was attending a training course at Fort Leavenworth in the U.S. state of Kansas when Tutsi rebels invaded Rwanda. After some initial success, the rebel forces were forced to retreat.

Among the casualties was their leader, who had been killed on the second day of the attack. When news of the failed invasion reached Kagame, he left the United States, resigned from the Ugandan military and took command of the Tutsi rebel militia.

Kagame instilled strict discipline in his growing rebel army. They would launch successful attacks that eventually brought the ruling Hutu government to sign a power-sharing agreement in 1993 known as the Arusha Accords.

But the peace agreement was a façade. Hutu extremists had no intention of sharing control of the Rwandan government. And in April 1994, they began their attempt to exterminate the Tutsi population.

Kagame's forces resumed their attacks, desperate to save their fellow Tutsis. The Hutu government had far more troops, but Kagame's soldiers had far more discipline. In battle after battle, they were victorious, gaining control of more and more of Rwanda, ultimately declaring victory in July 1994 -- but not before more than 800,000 were dead.

Kagame recently sat down with CNN's Christiane Amanpour in his presidential compound to talk about the hope of reconciliation as well as the international community's indifference to the plight of Rwandans during the 1994 genocide.

"The common interests we have for a better future of this country [are] more important than any other interests, especially such interests as of different groups," Kagame said. "And we say every Rwandan has the same opportunity to life, to the sources of this country, as the other."