BANGKOK, Thailand (CNN) -- Fourteen sailors are still missing from a Thai trawler that was sunk last week by the Indian navy as a suspected pirate ship, the vessel's owner said Tuesday. 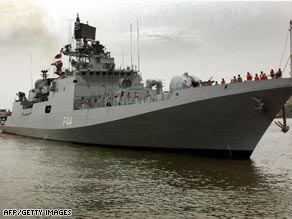 The Indian navy frigate INS Tabar was reported to have battled a "pirate vessel" last week.

One crewman was found alive after six days adrift in the Gulf of Aden, and one is confirmed dead, said Wicharn Sirichaiekawat, owner of the Ekawat Nava 5.

Last week, India's navy reported that the frigate INS Tabar had battled a pirate "mother vessel" in the gulf November 18, leaving the ship ablaze and likely sunk. Wicharn said that vessel was his ship, which was in the process of being seized by pirates when it came under fire.

Indian authorities insisted that their ship had acted against a pirate vessel that had threatened to attack the Tabar.

"We fired in self-defense and in response to firing upon our vessel. It was a pirate vessel in the international waters, and its stance was aggressive," said Commodore Nirad Sinha, a navy spokesman. He said the ship the Tabar fired upon was laden with ammunition.

Watch more about the piracy threat in the region »

Wicharn said the Ekawat Nava 5 was headed from Oman to Yemen to deliver fishing equipment when it was set upon by pirates off the Horn of Africa. The pirates were seizing control of the ship when the Tabar moved in, he said.

Wicharn said he learned the fate of his vessel from a Cambodian crew member who survived the gunfire and drifted in the ocean for six days before he was plucked to safety by a passing ship. The sailor was recovering in a hospital in Yemen, he said.

Wicharn said his ship made a distress call November 18 as it was chased by pirates in two speedboats, but the connection was lost midway. The owners, Sirichai Fisheries, had not heard from the crew since then.

Later that evening, the Indian navy said it encountered a suspected pirate "mother vessel," with two speedboats in tow about 285 nautical miles (525 km) southwest of the Omani port of Salalah. "Mother vessels" are often used as mobile bases to ferry pirates and smaller attack boats into deep water.

When the Tabar's crew hailed the ship and demanded that it stop for inspection, the pirates threatened to destroy the Indian ship, the ministry reported.

The Indian frigate returned fire, setting the pirate ship ablaze and setting off explosions on board, the statement said.

An international fleet has been patrolling the waters off the Horn of Africa in an effort to crack down on pirates based in largely lawless Somalia.

Pirates have attacked more than 90 vessels off East Africa this year, according to the International Maritime Bureau's Piracy Reporting Center, which monitors piracy around the world, including a Saudi supertanker captured this month.

The latest ship seized was a Yemeni freighter Adina taken last week with a crew of seven on board, including two Yemenis, two Panamanians and three Somalis, security sources in Yemen told CNN.

The government is in direct contact with officials in Somalia to work on rescuing the ship, for which the hijackers are seeking a $2 million ransom.

And competitors in the world's biggest ocean race made an unprecedented change of course this year as organizers mandated yachts steer clear of Africa's east coast.