Commentary: Your spare change will feed the hungry and save lives

By Drew Barrymore
Special to CNN 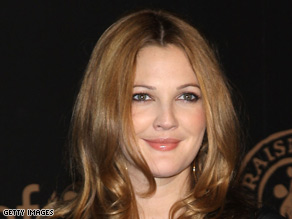 Drew Barrymore says a tiny amount of money can bring nourishment and education to impoverished children.

(CNN) -- I made my first trip to Nairobi after reading an article in The New York Times about schools and how they can change a child's life.

Dollars could do wonders for one child in a year in Africa, providing food and education, it said, while children in so many other parts of the world have the luxury to spend that money on miscellaneous fun.

The article made me feel one person could actively help another person; that I could tangibly help a child in need. A problem that had seemed so vast, so untouchable to me, suddenly felt smaller and more contained -- at least for the moment.

I picked up the phone and called the United Nations and told them that I would love to further educate myself on what they do and would more than anything love to go with them on a trip to Africa to see things firsthand.

In 2005, I was lucky enough to get the opportunity to be invited by the U.N.'s World Food Program. I took my documentary crew with me; we spent a couple of weeks in Kenya. Being with these children and traveling to many different schools by bus, train and plane all through Kenya and in Nairobi was life-altering. And what really pushed everything forward for me was speaking to the children and the families themselves.

I was astonished to learn what the mothers have to go through when infected with HIV -- the bond created among these families, when children bring their mothers part of their daily food ration to sustain them so they can take their medicines.

In these places I was able to see what the schools require in order to continue and what resources are necessary, what the WFP does and how I could help. I was given an opportunity to sit in these families' homes and hear their stories. I saw how feeding these children in school enabled them to pay attention and learn. That was my first trip and I came back knowing that this was for me.

I returned to Africa again in 2007 and once again visited the schools and spent time with the families, along with marathon runner and two-time Olympic silver medalist Paul Tergat, a fellow WFP ambassador against hunger. His life story is truly inspirational -- in fact, he received school lunches from WFP as a little boy while attending primary school in Kenya's Baringo district.

As an ambassador for the WFP, I have had the honor to work in the field overseas, but also here in the United States. What has always struck me about the WFP's Red Cup campaign is its ease and inclusive nature.

Everyone can be a part of saving another person's life. The numbers continue to astonish me in their ability to bring nourishment and education to those children -- 25 cents a day, $5 a month, $50 a year can feed a child and offer them the opportunity for an education, which is a fundamental right.

It was incredible to be on "Oprah" donating $1 million to WFP; but my heart was lifted so much higher when I saw the donations that followed from inspired students, working adults, mothers, fathers, daughters, people all across the United States, giving what they could to additionally raise over $500,000 that will fill the cups of children in WFP schools across the globe.

One person's quarter can fill a child's cup. In this domestic fieldwork, I joined up again with Josette Sheeran, the executive director of the WFP, at the Chicago Mercantile Exchange to address rising food prices firsthand. Josette and I banded together again at the Clinton Global Initiative, where school feeding programs were brought to the forefront. Words cannot express the energy that filled me when I saw Bill Clinton holding the WFP Red Cup.

It's the same red cup that sits on my desk, that carries in it stories of children and families struggling, that carries in it the message that just the smallest amount of money will fill that cup and will feed a child and will educate that child and give her the chance to continue through this world and make a difference of her own.

That, to me, is what the World Food Program is all about -- people helping people -- and that is why I'm so very grateful to be an ambassador against hunger.

The opinions expressed in this commentary are solely those of Drew Barrymore.