NAIROBI, Kenya (CNN) -- Three British guards jumped overboard and were rescued from the water after battling in vain to prevent pirates hijacking a chemical tanker off the coast of Somalia. 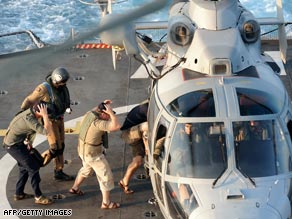 Three British security guards board a helicopter to be transferred to a Royal Navy vessel.

The trio were airlifted to safety by a German naval helicopter and flown to a French frigate after the vessel summoned assistance from coalition warships. They were later transferred to a British Royal Navy ship. All three were unhurt, Davis said.

"I have spoken with my team leader on the phone and he informs me that the level of violence was significant and forced them reluctantly to leave the vessel after every effort was made to ensure the safety of the ships crew," Davis said.

Pirates continued to shoot at the three in the water, Davis said. "The hijacked vessel with pirates in control then attempted to run them down."

The Biscaglia is managed by Singapore-based Ishima and owned by Winged Foot Shipping in the Marshall Islands and was crewed by 25 Indians and two Bangladeshis who are believed to be still onboard.

The vessel is believed to be on its way to an anchorage in Puntland, northeastern Somalia, Davis said. iReport.com: Share your view from 'Inside Africa'

Also Friday, pirates released the Greek ship MV Centauri, which was hijacked in September off the coast of Somalia, according to Andrew Mwangura, the head of the Kenya Seafarers Association.

There was no immediate information about the 25 crew members on board the ship when it was taken.

A multinational naval force including vessels from the U.S., NATO member states, Russia and India has been patrolling the Indian Ocean waters seas near the Gulf of Aden, which connects the Red Sea and the Arabian Sea, following a sharp increase in pirate attacks in the region.

So far this year, pirates have attacked almost 100 vessels off the coast of Somalia coast and successfully hijacked nearly 40, according to the International Maritime Bureau's Piracy Reporting Center.

The most high-profile hijacking so far came earlier this month, when pirates seized a Saudi oil tanker carrying $100 million worth of oil and a crew of 25, although that attack occurred outside the pirates' normal operational range, 450 nautical miles southeast of Mombasa, Kenya. Pirates are still holding the ship.

Another vessel held since September is the Ukrainian MV Farina, which was carrying a cargo of weapons and tanks and a crew of 22.

In an interview provided to CNN this week, a pirate leader claimed attacks on shipping would continue as long as life in Somalia remained desperate.

The interview was conducted in August by journalists working for the Somali news organization, Garowe.