(CNN) -- Almost 12,000 people have contracted cholera since August in Zimbabwe, and the outbreak threatens to grow more dire -- and deadly -- because the nation can't pay for chemicals to treat water or for doctors to treat victims. 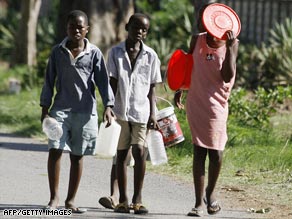 There was no running water Monday In Harare, the capital, according to the opposition Movement for Democratic Change.

The World Health Organization reports that 11,700 people in Zimbabwe have contracted the curable disease and 473 people have died from it since August -- but MDC Health Secretary Henry Madzorera said the numbers are being underreported. He did not say by how much.