(CNN) -- A Dutch-operated container ship outran pirates off the coast of Tanzania this weekend, an official with the International Maritime Bureau said Sunday. 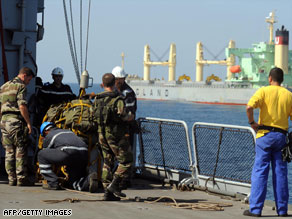 French soldiers, who have joined British, Indian, Russian and American patrols off Somalia, during an exercise.

The incident took place "very far out to sea," showing that Somali-based pirates are extending their reach further and further, Noel Choong of the IMB's Piracy Reporting Center told CNN.

"Earlier attacks were on ships off the coast of Somalia, then off the coast of Kenya, and now this was 450 nautical miles off Dar es Salaam," he said, tracing the southward expansion of the pirates' area of operations.

The ship, which Choong declined to name, came under attack from rocket-propelled grenades, starting a fire on board, he said. The crew was able to put out the fire and escape by increasing speed.

The ship and crew are now out of danger, he said, following the incident at 11:42 GMT Saturday.

Piracy has become increasingly common in the Gulf of Aden and the Indian Ocean this year. So far, pirates have attacked almost 100 vessels off Somalia's coast and successfully hijacked nearly 40, according to the center.

Watch how NATO is combating piracy »

Those hijacked vessels include an enormous oil tanker, a chemical tanker, and a ship laden with Soviet-era arms including tanks. The pirates normally hold the ships for ransom.

A luxury cruise ship carrying more than 1,000 passengers and crew successfully outran pirates off the coast of Yemen last weekend.

The IMB has tracked at least 11 incidents of actual or attempted piracy near the Tanzanian coast this year.

A multinational fleet, including vessels from the U.S., NATO member states, Russia and India, has been patrolling the Indian Ocean waters near the Gulf of Aden, which connects the Red Sea and the Arabian Sea. Around 20,000 oil tankers, freighters and merchant vessels pass along the crucial shipping route each year.

In a recent interview provided to CNN, a pirate leader claimed attacks on shipping would continue as long as life in Somalia remained desperate.

All About Tanzania • International Maritime Bureau