(CNN) -- The United States and other Western powers have "exacerbated Somalia's downward spiral" and must revise their policies in the east African country, a Human Rights Watch report has warned. 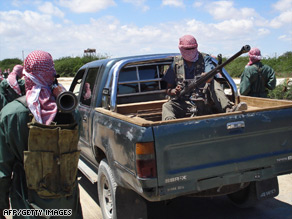 The report, released Monday, blames the policies under President George W. Bush for "breeding the very extremism that it is supposed to defeat."

"The new administration of U.S. President Barack Obama should urgently review U.S. policy in Somalia and the broader Horn of Africa and break with the failed approach of his predecessor," the report said.

It also cites key European governments for failing "to address the human rights dimensions of the crisis, with many officials hoping that somehow unfettered support to abusive TFG (Somali transitional government) forces will improve stability."

Somalia's weak transitional government, backed by Ethiopian forces, continues to battle Islamic militias with the fighting concentrated in the capital, Mogadishu. Ethiopian forces have not withdrawn from the country, as required under a recent cease-fire agreement.

Ethiopia invaded Somalia two years ago and successfully routed the Islamic militia that seized control of the capital. The HRW report states that the United States "directly backed Ethiopia's intervention."

Since the 2006 overthrow of the Islamic Courts Union, Somalia has suffered from "unconstrained warfare and violent rights abuses" by all warring parties.

"All sides have used indiscriminate force as a matter of routine, and in 2008 violence has taken on a new dimension with the targeted murders of aid workers and civil society activists," the report states.

"The human rights and humanitarian catastrophe facing Somalia today threatens the lives and livelihoods of millions of Somalis on a scale not witnessed since the early 1990s."

Heavy fighting in Mogadishu and across Somalia has driven more than a million people from their homes. The lawlessness has also spilled onto the seas off the Horn of Africa, where international vessels are routinely hijacked by suspected Somali pirates who demand large ransoms.

Human Rights Watch offers specific recommendations to the Somali and Ethiopian governments, the main militias, and the international community to address the human rights abuses.

It calls on the West to "insist upon an end to the impunity that has fueled the worst abuses - and the right place to start is by moving the U.N. Security Council to establish a Commission of Inquiry to document abuses and lay the groundwork for accountability."