HARARE, Zimbabwe (CNN) -- Nearly 775 people have died in Zimbabwe from the recent cholera outbreak, an official from the World Health Organization said Wednesday, refuting the government's claim that the situation is under control. 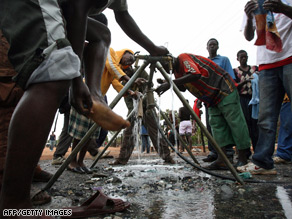 The number of overall cholera cases is also on the rise, hitting 15,141 on Wednesday, said Dr. Eric Laroche, who heads the WHO unit addressing health action during the crisis.

The WHO added that up to 60,000 people in Zimbabwe could be infected if the epidemic worsens.

Meanwhile, Zimbabwe's opposition leader Morgan Tsvangirai said the country's widening humanitarian crisis could only be addressed once a "legitimate government" was in place.

"It is up to that government to deal with the problems the country is facing, which are quite wide-ranging," Tsvangirai said.

"But the immediate intervention of the health crisis has exacerbated the situation to the extent that it has now become an international crisis."

Laroche told CNN from the Zimbabwean capital of Harare that "the epidemic is clearly on the increase."

"I think it's going to last for several months."

Laroche said the current outbreak had a high fatality rate, indicating that sufferers were either not able to reach health centers in time or that the centers lacked the capacity to treat them.

Zimbabwe's information minister said Tuesday the cholera outbreak was under control, and he argued the West caused the health crisis and was using it as an excuse for military intervention.

Zimbabwe, already experiencing an economic crisis, was struck with the water-borne cholera in August. Health experts say the battle against the disease can only be won if Harare has adequate water-treating chemicals and disposes of refuse properly.

Laroche said the WHO team was in Harare at the request of Zimbabwe's health minister and was getting government cooperation during its stay. It was trying to repair the health system with the help of non-governmental organizations, U.N. agencies, donors and the Zimbabwean government, Laroche said.

Among the issues the WHO is tackling is disease surveillance, because Laroche said there may still under reporting or poor reporting of cases.

"The quality of the care, the supplies that come inside Zimbabwe, also need to be restored," Laroche said. "So there's a lot of work to do, because the health system is collapsing."

The International Committee of the Red Cross is also ramping up its response to the outbreak. A doctor of infectious diseases and a medical logistician specializing in health, sanitation and hygiene have arrived in the country, the ICRC said, and the agency delivered 13 tons of medical supplies to the ICRC in Harare last week.