NAIROBI, Kenya (CNN) -- Three African armies launched a raid on a rebel camp in the Democratic Republic of Congo, the three armies announced on Monday. 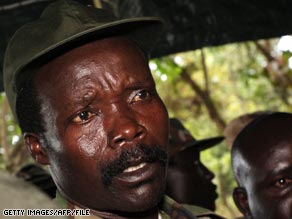 Jospeh Kony, leader of the Lord's Resistance Army, in 2006 in southern Sudan.

Congo's national army joined Ugandan forces and southern Sudanese militia in a military operation Sunday meant to root out pockets of the Lord's Resistance Army -- which had been preparing to launch an assault on Uganda from camps in eastern Congo, a joint statement from the three said.

The operation comes amid stalled peace negotiations intended to disarm LRA leader Joseph Kony and end a rebellion that began in Uganda over two decades ago when President Yoweri Museveni came to power.

Targeting rebel hideouts in Garamba, the triumvirate force said it was trying to rescue hostages and hunt down LRA leaders, accused of fomenting recent attacks against civilians in the region, including DRC, southern Sudan, and Central African Republic.

LRA spokespeople could not be immediately reached for comment.

The Lord's Resistance Army -- led by Kony, who claims spiritual powers -- sought to overthrow its government, demanding the constitution be replaced with a version of the Ten Commandments.

The LRA, which the U.S. State Department describes as "vicious and cult-like," has been known for its unpredictable behavior.

The 33 counts against Kony included 21 counts of war crimes.

Charges also included sexual enslavement, rape, inducing rape, directing attacks against civilians and forced enlisting of children to fight, according to a news release from the court.

Eastern Congo has been riddled by another conflict -- warfare between rebels and government forces that has uprooted 250,000 people since summer and has claimed the lives of many.

That conflict is an offshoot of the Rwandan conflict dating back to the early 1990s, when hundreds of thousands of Rwandans were killed in ethnic battles between minority Tutsi and majority Hutu.

CNN's David McKenzie and Carolina Sanchez contributed to this report.

All About Democratic Republic of the Congo • War and Conflict • Diplomacy