(CNN) -- The West African country of Guinea, reeling after the death of President Lansana Conte, is staring at the prospect of widespread political instability amid an apparent coup. 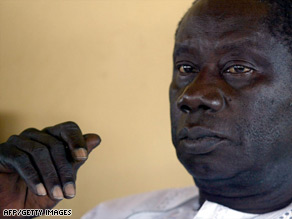 Lansana Conte came to power in a military coup in 1984.

Journalist Mohammed Kayta in Conakry said the Guinean military seized control of the capital city's streets in an apparent coup. He reported that the military was holding negotiations to determine who will succeed Conte, who ruled the country for nearly 25 years.

The action followed an announcement on national radio Tuesday by army Capt. Foamed Dadis Camara that government and national institutions had been dissolved, according to Le Jour, a national newspaper, and the subsequent announcement by Prime Minister Ahmed Tidiane Souare that the government continued to function.

Soldiers were out in force, including around the offices of the president and prime minister in Conakry, local journalist Barry Minkalou told CNN. The streets were calm, with no reports of injuries or violence, he said.

Camara said Tuesday an "advisory council" of civilians and soldiers would be set up.

The Foreign Office in Great Britain said it was "concerned by reports of a military coup.

"We condemn any attempt to seize power by force, and call on all parties to ensure respect for democracy, human rights and the rule of law, and to safeguard the well-being of their own citizens and foreign nationals in Guinea," the office said.

U.N. Secretary-General Ban Ki-moon, who issued a statement commending Conte and passing along condolences, urged "a peaceful and democratic transfer of power" and exhorted "the armed forces and all stakeholders to respect the democratic process."

The United Nations told its personnel in Guinea to stay off the streets.

"All U.N. staff have been encouraged to stay at home," the U.N. High Commissioner for Refugees' spokesman in Guinea, Faya Foko Millimouno, told CNN. "Only the military is in the street now."

The U.S. Embassy in Conakry warned Americans in the country "to be particularly alert to their surroundings, and to be prepared for any eventuality."

"We regret to announce to the people of Guinea the death of Gen. Lansana Conte after a long illness," Sompare said, according to Le Jour. Conte was 74.

A 40-day period of national mourning has been declared.

Guinea is one of the poorest countries in the world, despite its mineral wealth, according to the British charity Plan UK. The country hosts large refugee populations from neighboring Liberia and Ivory Coast.

All About Ban Ki-moon • Guinea