(CNN) -- A Catholic aid organization operating in the Democratic Republic of Congo and the country's government have accused Uganda-based rebels of massacring 400 civilians during Christmas celebrations last week. 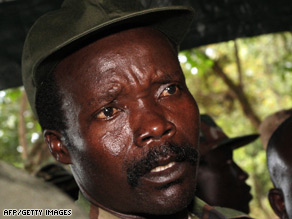 The Lord's Resistance Army, led by Joseph Kony, has been accused of many atrocities.

Caritas International expressed its "shock" at the killing spree in northeastern Congo, blaming the rebels for attacking a Christmas day concert sponsored by the Catholic church in the town of Faradje. LRA rebels also burned down a church in another village, it said.

"The areas have been plundered, leaving the people in desperate need of aid," the organization said in a news release issued on Monday. "Caritas says that the number of dead bodies risk spreading disease."

Several Congolese officials and two Catholic priests were among those killed in Faradje, according to the U.N. peacekeeping mission in Congo, known by its French acronym MONUC.

The rebels torched 120 homes in Faradje, and looted the rest of the village -- forcing its 30,000 residents to flee to neighboring towns -- according to the U.N., citing humanitarian workers in the region.

Congo's Communications Minister Lambert Mende Omalanga told CNN that the attacks happened as the rebels were fleeing Congolese army forces and victims were "mostly women, children and old men -- those who could not run and escape."

Congo's army, along with Ugandan and Sudanese forces, launched a raid against LRA rebels earlier this month. It came amid stalled peace negotiations intended to disarm LRA leader Joseph Kony and end a rebellion that began in Uganda over two decades ago when President Yoweri Museveni came to power.

The LRA, led by Kony, who claims to have spiritual powers, sought to overthrow Uganda's government, demanding the constitution be replaced with a version of the Ten Commandments.

The LRA, which the U.S. State Department describes as "vicious and cult-like," is known for its unpredictable behavior.