BOGOTA, Colombia (CNN) -- Secret agents posing as leftist rebels hoodwinked insurgents and freed 15 hostages from the jungles of Colombia by pretending an "international mission" was on its way to visit the hostages, authorities in Colombia say. 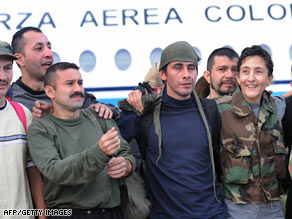 Ingrid Betancourt, right, and other freed captives arrive in Bogota on Wednesday.

Plans for the bold and daring mission began months ago, when Colombian agents penetrated the leadership group of the Revolutionary Armed Forces of Colombia, or FARC, a Marxist-inspired insurgent force that has waged war on the Colombian state for 40 years, Gen. Freddy Padilla de Leon told CNN.

Agents infiltrated the "highest level" of the seven-member secretariat of FARC, he said. They also penetrated a team of rebels led by a fighter who had been assigned to guard hostages.

Posing as FARC members, the agents gained the rebels' trust and eventually ordered them to move several hostages from three separate locations to one central area.

"We convinced the FARC that they were talking to those of their own," said Gen. Mario Montoya of the Colombian Army. "It was all human intelligence."

After the 15 hostages were in one location, agents ordered FARC fighters to march their captives about 93 miles (150 km) north, he said, through the sweltering jungles of southeastern Colombia.

The agents persuaded the FARC to turn over the hostages by saying an "international mission" was coming to visit the hostages, Montoya said.

The plan reached its climax on Wednesday, when an unmarked white helicopter with room for 24 people swooped into the jungle carrying Colombian security forces posing as FARC rebels. Some wore shirts emblazoned with the likeness of Che Guevara, the Argentine hero of the Cuban revolution.

Agents spilled out of the helicopter and told FARC fighters that they would take the hostages to another location in Colombia -- where they were to meet the "international mission," Montoya said at a news conference late Wednesday.

During their time on the jungle floor, the government pilot and co-pilot spoke in code with their colleagues, authorities said, using phrases such as "Generators okay" that carried a secret meaning to the security forces.

They were on the ground for 22 minutes.

Betancourt had heard talk about an "international mission," she said, and expected when she heard the helicopter to see a Red Cross emblem or meet members of a delegation from France or Switzerland. She said she was crestfallen to see the helicopter had no markings.

Betancourt said she resigned herself to the understanding that the FARC was taking her from one place to another -- the latest in a string of transfers during her years as a hostage.

The men who stepped off the helicopter handcuffed her and put her on board.

"We were very unhappy," she said.

The agents -- still posing as rebels -- persuaded two rebel commanders to board the helicopter with 9mm pistols.

Then the helicopter took off.

Once aloft, Colombian agents, still posing as rebels, persuaded the two FARC members on board to hand over their pistols.

"Suddenly there was something happening," Betancourt said. "Suddenly I saw the commander who, during four years, had been at the head of our team, who so many times was so cruel and humiliated me, and I saw him on the floor, naked, with bound eyes."

"We are the national military," he said, Betancourt recalled. "You are free."

The hostages cheered and cried.

"Then I prayed to God, 'Please keep this helicopter in the air,'" Betancourt said, her voice breaking with emotion. "I didn't think happiness was possible again."

She spoke at a news conference that lasted from late Wednesday into early Thursday.

Watch Uribe congratulate the Colombian military on the rescue mission »

"Today the armed forces of Colombia, the army of this country, our soldiers and policemen are entering the pages of heroes of humanity," the president said. "They have written the name of Colombia on a golden mold of the democratic world."

The government was cagey about how the infiltrations occurred, saying in a written statement only that it used "various procedures."

No one was hurt in the operation, though Colombian soldiers could have killed nearly 60 FARC members at the site of the planned handover, Padilla said.

"We preferred to leave them with liberty and life because, in Colombia, we prefer life over death," he said.

None of the people who collaborated with the government was paid, he said.

"These were people who understood that the FARC has neither a present nor a future," he said. "This organization is absolutely despised by the Colombian people. The immense majority of the Colombian people support their democracy, their presidency, their armed forces."

All About Ingrid Betancourt • Colombia • FARC