BOGOTA, Colombia (CNN) -- Colombia showed video Friday of an orderly mission that ended in hugs and laughter for 15 hostages who were rescued from a Colombian guerilla group this week. 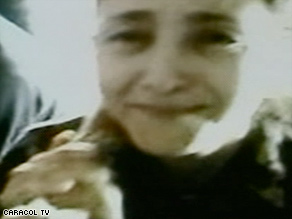 Former presidential candidate Ingrid Betancourt is shown on the video of the rescue.

The 3½-minute video was shot by Colombian soldiers posing as a media crew during Wednesday's operation. It was shown at Colombia's military headquarters Friday.

It begins with the hostages being led across a field, heads bowed and their wrists in the plastic banding commonly used as handcuffs.

Watch video of the rescue operation »

The camera quickly moves on, capturing the image of one of the Americans who displays his handcuffed wrists to the camera, then shifts focus to Betancourt. She appears indignant at being forced to be handcuffed.

"My heart broke because I did not want another transfer, another time, in captivity," Betancourt said soon after her rescue.

The tape then shows the hostages getting into the helicopter with two of their FARC captors, alias "Gafas" and "Cesar," who was carrying a revolver, Defense Minister Juan Manuel Santos said.

The FARC members -- most of them women -- had been led to believe the handoff had been ordered by FARC leader Alfonso Cano, and that the nine people in the helicopter were part of an international mission intended to transport the hostages to another FARC camp as negotiations for their release were to begin, Santos said.

Watch what the FARC is all about »

In fact, they were a doctor, two nurses and members of the intelligence arm of the Colombian military who volunteered months ago to participate in the ruse, Santos said.

One was a man pretending to be an Italian managing the mission. "He was such a good actor that he convinced alias 'Gafas' to give him the revolver," Santos said.

They had spent months worming their way into the Revolutionary Armed Forces of Colombia, or FARC, an insurgent force that has waged war on the Colombian state for 40 years, Gen. Freddy Padilla de Leon said.

As part of the ruse, "Cesar" had been told that news about the handoff was to be kept quiet because "there were many people trying to sabotage it," Santos said.

But that was not the real reason. "We asked him to be silent so that he wouldn't be able to communicate with other people [who might be able to tell him] it wasn't what we said it was going to be," Santos said.

The videotape does not include the moment when the two real FARC members aboard the helicopter were taken into custody, because the cameraman participated in that effort, Montoya said.

"They just let go of the camera," he said. "They had their job to do."

But it resumes rolling immediately afterward as the 15 longtime hostages are told they are actually in the hands of the national army.

"The helicopter started flying and suddenly there was something happening," Betancourt said Wednesday. "Suddenly I saw the commander who, during four years, had been at the head of our team, who so many times was so cruel and humiliated me, and I saw him on the floor naked with bound eyes." Then, the reality of her liberation hit home.

On the video, an ecstatic Betancourt erupts: "Oh, my God!" Thank you so much, God! Thank you so much! We never thought this would happen!" iReport.com: Reader witnesses hostage release in Colombia

During the 1½ hours between her release and the time she arrived to a hero's welcome in Bogota, Betancourt changed her hairstyle three times, Montoya said.

The United States helped the Colombians place two devices in the helicopters "so that in case of emergency we could transmit some type of SOS," Santos said.

In addition, Santos said, a U.S. airplane was in the area to help with intelligence. "But they didn't participate in any form in the mission," he said.

The bloodless rescue was the product of a perfectly executed ruse that depended on old-school spy games rather than high-tech gadgetry.

The mission was intended to be similar to two missions led this spring by Venezuelan President Hugo Chavez that resulted in the release of hostages, Montoya said.

"There was always a cameraman in the ones that Chavez organized," he said.

When the time was right, the moles used the authority they'd gained within the group to order the 15 hostages moved from three separate locations to one central area, and the game was on.

"We convinced the FARC that they were talking to those of their own," said Gen. Mario Montoya of the Colombian army. "It was all human intelligence."


Once the hostages were gathered, the agents ordered a 90-mile march through the steamy jungle, Montoya said.

Such relocations were not unusual for the hostages or the rebels, who constantly move about to avoid detection by the Colombian military.

Little did the rebels know that the military was about to pull off a bait-and-switch that would leave them standing in a jungle clearing, not realizing they'd just been hustled out of their most valuable assets.

CNN's Karl Penhaul contributed to this story from Bogota.

All About Colombia • FARC • Hostage Situations • Espionage and Intelligence