(CNN) -- Ingrid Betancourt says death was her "everyday companion" during the six years she was a hostage of a leftist rebel group in Colombia. 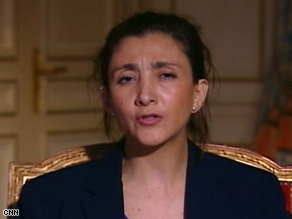 "I really couldn't even imagine that I was taking the road for seven years," she told CNN's "Larry King Live." "For me, I thought perhaps it could last for three months at the most. I couldn't imagine what was going to come."

Betancourt, who has French and Colombian citizenship, was campaigning for the Colombian presidency when the Revolutionary Armed Forces of Colombia abducted her in 2002.

She was rescued July 2 in an elaborately planned ruse that hoodwinked FARC captors into giving up Betancourt and 14 other hostages including three American contractors. She spoke to King Tuesday from Paris, France.

During the interview, Betancourt talked very slowly and appeared weary. She explained that it had been a long and arduous week.

Her kidnapping was swift and it was hard for her at first to comprehend going from a free person to a prisoner, she said. Have a question for Betancourt? Ask it here

"You are a free woman and then you become a prisoner and you receive all kinds of orders. Sit here, stand there. That's it," she said. "You just, you don't have the possibility of even moving to take your bag without asking for permission."

Betancourt's campaign for Colombia's presidency was built on her promise to curb drug trafficking and FARC's methods of kidnapping innocent people. She met with FARC leaders, imploring them, "No more kidnapping."

"I thought that perhaps we had that common ground. I was mistaken. I didn't understand that they think completely different.

"If you don't work with them, if you're not one of the members of that club, you are an enemy," she added. "I didn't know I was their enemy, but I was."

Betancourt said she knew her captors had orders to kill her if a rescue operation was launched.

"I lived for nearly seven years with the awareness that death was my everyday companion," she said.

Medical care was nonexistent, she said, and even day-to-day activities were difficult. "I was the only woman in a camp with other men," she said. "Everything for me was difficult. Bathing, changing myself, I was always late for everything."

The rebels' response to her lateness: "They scream. That was every day life."

She said after being freed she immediately noticed one thing about her life was drastically different -- she was no longer constantly scratching herself, bombarded by bugs and insects.

"In a week, the difference of going from this life to that life..."

Betancourt answered nearly all questions, but she would not discuss Emmanuel, the child born in captivity to her running mate, Clara Rojas -- who was captured along with her -- or whether she was sexually abused.

Rojas was released earlier this year. Rebels took Emmanuel from his mother about a year after his birth in 2004, delivering him to a farmer who posed as an uncle and had the boy placed in foster care in Bogota, where he remained until being reunited with his mother after her release.

Betancourt also would not detail the punishment she endured after a failed escape attempt.

"Oh, that was horrible," she said before telling King that she was "not ready for that."

"I don't want to fill myself with those memories," she said.

But the worst thing that happened to her, she said, was "realizing that mankind, that human beings can be so horrible to other human beings."

Despite her nightmare, Betancourt said she harbors no hatred for FARC rebels. "It's like a kind of position I took many years ago that when I was released I wouldn't take out of the jungle any kind of bitterness or any kind of eagerness to seek for revenge, anything of that," she said. "And now that I'm out, I feel that I am like in another land. It seems so far and people seem so alien to me.

Betancourt's release was greeted with an outpouring of joy in France, with politicians and media praising the woman who had become a cause celebre in the country where she grew up.

She was given a clean bill of health last week despite reports that she had suffered chronic liver problems for years while in captivity. She walked on her own from a plane the day of her rescue and she remained standing for more than an hour as she recounted her rescue and answered questions from reporters.

On the day of her rescue, Betancourt said, the hostages were awakened at 4 a.m. and told they had to be ready to move. An international commission, they were told, was coming by helicopter, and they were to be moved to another place in that helicopter.

But when it arrived, one of the men aboard the helicopter appeared to know the rebel commanders, and the hostages lost hope.

"There was this camera and they were filming us and I was thinking, they just want to tape us so that the world sees that we are alive ... and this is going to go on and on and on for four more years, five, six more years," she said.

In truth, the Colombian military had tricked the rebels into believing the transfer was ordered by a FARC commander. And once the hostages were taken aboard the helicopter and it took off, the soldiers overcame the rebel commander who boarded with them, Betancourt said.

"I saw the commander of the FARC, he was on the floor, he was neutralized and I heard the voice of the leader saying 'This is Colombian Army, you are free,' " she said.

"I couldn't talk. I screamed. It was like a yell from, it was a scream that went from the bottom of my stomach," she said. "And then I hugged everyone I could hug. I would have hugged anyone at that second. I hugged the one that was beside me, front -- I would kiss everybody. It was crazy. It was very intense. We were crying."

Now that she is in France and has been reunited with her children and her mother, Betancourt said she is still concerned with the fate of other hostages held in the FARC-controlled jungles.

As for her future, Betancourt said she would likely run for office again, but added that it wasn't a priority at the moment.

"I'm the same woman, but I know that deep in my heart, I've changed in many ways," she said. "I have changed in the way I relate to people and the way I react to many things. I changed also my goals in life. I think that the only thing that remains, perhaps, is my desire to be there for others and to help."

All About FARC • Colombia