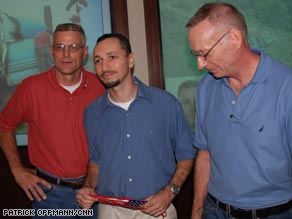 Marc Gonsalves, Thomas Howes and Keith Stansell have been undergoing a reintegration process at Brooke Army Medical Center in San Antonio, Texas, since their return 10 days ago to the United States.

The men were among 15 hostages, including former Colombian presidential candidate Ingrid Betancourt, who were rescued July 2 in a Colombian military operation.

The men carried with them a metal lock, a bullet and a chess board made of cardboard -- small items that are reminders of the years they spent away from their families, cut off from the world outside the jungle, seeing only fellow hostages and their captors, the Revolutionary Armed Forces of Colombia (FARC).

The group had held the three U.S. government contractors hostage since February 2003, after their plane crashed in a remote region of the South American country.

The men painted a gruesome picture of their captivity, describing months in which they were ordered not to speak to each other and an initial campsite where they lived with a rat's nest above them. They slept on the floors of drug labs and were forced to march for hours while chained.

Chains were very much a part of their captivity.


"That was put around my neck every night," Stansell told Headline News' Robin Meade on Thursday, holding a heavy industrial lock. "This lock, with 5 meters of chain -- thick, 1-inch links -- went to his neck," Stansell said, pointing at Gonsalves.

Watch how the rescue surprised the hostages »

Gonsalves also held small wooden chess pawns he had carved using a broken piece of a machete. It took three months to make them, he said.

Watch Gonsalves talk about how chess made him feel free »

"We're in chains, sitting Indian-style on a piece of plastic, just playing chess," Stansell said. "And when you're doing that, you're free."

Howes, the most reticent of the three, carried with him a bullet from a commander who had once threatened to kill him.

But despite the chains, the intolerable living conditions and the isolation, being away from their families was possibly the most difficult hardship to endure, the men said.

"I remember my darkest day was in the first month of our captivity," Gonsalves said. "We were, at that point, locked in boxes at night. ... That night, I dreamt about my daughter, who was my little girl and still is. And I had this dream about her that was so real; she was sitting on my lap, and ... she had little braids in her hair," he said.

"It was a wonderful dream, with all of my family. But the problem was, I woke up."

Colombian government agents infiltrated the FARC leadership over several months, eventually tricking the rebels into moving the hostages by saying a humanitarian group wanted to check on them.

A helicopter carrying fake rebels picked up the hostages at a rendezvous point on July 2, ostensibly to take them to another rebel camp. But it was actually a Colombian military helicopter and the hostages were flown away, free, without a shot being fired. Read about the daring rescue mission

The FARC, which has been fighting with the Colombian government and other paramilitary groups for decades, defends the taking of captives as a legitimate act of war. The group is thought to be holding about 750 prisoners in the nation's remote jungles.

Along with the former contractors, French-Colombian politician Ingrid Betancourt was also freed from FARC. She was abducted by the rebels in 2002 during her campaign for Colombia's presidency. She told CNN's Larry King on Wednesday that her time as a hostage was "hell."

Stansell, who was captured while his girlfriend was pregnant with twins, said he believed for a while that one had died. A guard told Stansell he saw a photograph of the girlfriend with only one son, he said, although the guard did not produce the photograph.

Then, one day on the radio, he heard "two little guys ... sending me messages." On Sundays, Caracol Radio airs a program called "Voices of Captivity," a lifeline for FARC hostages as the program often plays messages from the family members of the hostages.

"This is just a deep breath of happiness," Stansell said of his sons.

The radio was also how Stansell's girlfriend accepted his marriage proposal, which he had smuggled out with a hostage who had been released, he said. She also accepted in person after his rescue, he said.

He said when he saw his sons for the first time, it was as though he had known them since birth.

Captivity also separated Howes from his wife and two sons.

"Before this [I] was a guy that was kind of a typical American guy that was working, busy working, running through a life full-speed," he said. "I had a little boy when we crashed that was 5 years old, another one 15. Had a wife who was back in the States; we just got a house. I had 12 nights in the house of my dreams in the States," he said.

"And suddenly, we drop off the face of the Earth."

He said, "When you're in our situation, we realize what's important. We know. The three of us know better than any of you guys out there, it's the family. And I'd like everyone to listen very closely to that."