Argentine president calls for decriminalization of drug use

BUENOS AIRES, Argentina (CNN) -- President Cristina Fernandez de Kirchner repeated her call this week to decriminalize personal drug use and crack down on traffickers and dealers. 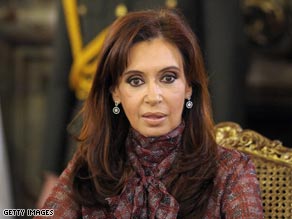 President Cristina Fernandez de Kirchner says she doesn't like to "condemn someone who has an addiction."

"I don't like it when people easily condemn someone who has an addiction as if he were a criminal, as if he were a person who should be persecuted," she told a meeting of the National Investigation into the Consumption of Alcohol, Tobacco, Psychopharmaceuticals and Illegal Drugs.

"Those who should be persecuted are those who sell the substances, those who give it away, those who traffic in it."

A poll shows 2 percent of Argentines have tried cocaine, but some people believe decriminalization of drugs could result in wider drug use.

Regardless, the Argentine government is pushing Congress to pass the decriminalization legislation by the end of the year.

"Decriminalization of the consumer should include what are called second-generation human rights, but at the same time there should be a strong policy of prevention, so that no one falls in the situation of consuming any substance," said Anibal Fernandez, the minister of security and justice.

Ethan Nadelmann, founder and executive director of the New York-based Drug Policy Alliance, said such policies have been adopted throughout Europe and other parts of Latin America.

"The evidence generally shows that the decriminalization of possession is not clearly associated with any increase in illicit drug use," he said.

A few years ago, then-Mexican President Vicente Fox proposed decriminalizing possession of drugs combined with a crackdown on traffickers, but a harsh reaction from the Bush administration caused him to retreat, Nadelmann said.

Brazil and Colombia have passed laws decriminalizing drug use in an effort to combat the spread of HIV among injecting drug users, he said.

Politicians recognize that "you basically need to get those people out of the underground and into health systems," Nadelmann said.

"This would be part of a growing number of countries in Latin America where there is, either for political or judicial reasons, a push toward decriminalization of personal possession, sometimes combined with initiatives to crack down harder on bigger drug traffickers," he said.

"It typically involves both lessening the criminal sanction for possession of cannabis while also providing for alternatives to incarceration for people addicted to drugs who are arrested for drug possession or other minor offenses."

The concept has gained followers in the United States, too, he said, citing statistics that show two-thirds of Americans support drug treatment instead of jail time for first-time drug offenders.

On Wednesday, Rep. Barney Frank announced a proposal to end federal penalties for Americans carrying fewer than 100 grams, or almost a quarter-pound, of marijuana.