CARACAS, Venezuela (CNN) -- The government of President Hugo Chavez has chipped away at human rights in Venezuela during the 10 years he has held power, says a report released Thursday. 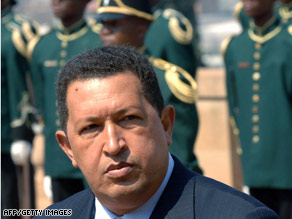 The report, presented in Caracas by Human Rights Watch's Americas director, Jose Miguel Vivanco, cited lack of autonomy among the nation's democratic institutions and loss of autonomy of the nation's high court as examples.

"During this decade, democracy and its key institutions have become seriously weakened, judicial power has lost independence, civil society has less space, the news media, too, and the unions -- the big, strong ones -- cannot exercise their rights," Vivanco said.

The government has responded to its critics with "an attitude of tremendous aggressivity," the 267-page report said.

"What normally occurs in the country is to demonize and discredit with sinister intentions those who feel differently, those who take a different position," he said. "It's important that that change."

Government officials defended their actions. Representative Tulio Jimenez, president of the Commission of Exterior Policy of the National Assembly, said the report is part of an international conspiracy against Venezuela's government.

According to the New York-based human rights group, Venezuela's government lacks controls over its exercise of power, controls that would deter abuse and guarantee the rule of the majority.

The report says a historic opportunity to strengthen the nation's democratic institutions was "largely squandered" in April 2002, when a coup d'etat briefly removed Chavez from power.

Though the coup lasted just 40 hours, "it has haunted Venezuelan politics ever since, providing a pretext for a wide range of government policies that have undercut the human rights protections established in the 1999 Constitution," the report says.

The report also cited "an open disregard for the principle of separation of powers" and an independent judiciary.

"In the absence of credible judicial oversight, the Chavez government has engaged in often discriminatory policies that have undercut journalists' freedom of expression, workers' freedom of association, and civil society's ability to promote human rights in Venezuela," the report says.

The organization criticizes the judiciary for failing "to counter assaults on the separation of powers" and failing "to safeguard fundamental rights in prominent cases involving the media and organized labor."

It accuses Chavez of "stacking the deck" against the news media.

"By expanding and toughening the penalties for speech and broadcasting offenses, Chavez and his legislative supporters have strengthened the state's capacity to limit free speech and created powerful incentives for critics to engage in self-censorship," it says.

Representative Jimenez, however, said the news media is able to report freely.

He also rejected the group's suggestion that the composition of the nation's Supreme Court of Justice be reviewed, asserting that the judiciary was elected as called for by the constitution.

The report was not wholly critical. It credited the government for supporting the creation of community radio and television stations "whose broadcasting contribute to media pluralism and diversity in Venezuela."

But it questioned Chavez's presentation of himself as a champion of democracy, concluding that "his professed commitment to this cause is belied by his government's willful disregard for the institutional guarantees and fundamental rights that make democratic participation possible."

Journalist Mario Gonzalez contributed to this story from Caracas.