(CNN) -- Venezuelan President Hugo Chavez on Sunday said he was interested in working with Russia to develop a civilian nuclear power program. 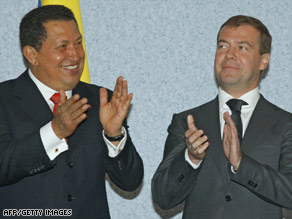 His statement at a televised political rally in Caracas, Venezuela, followed a trip to Russia, where he met with Russian Prime Minister Vladimir Putin and President Dmitry Medvedev.

"We certainly are interested in developing nuclear energy, for peaceful ends of course -- for medical purposes and to generate electricity," Chavez said, noting that Brazil and Argentina have such programs.

He said Russia offered to help Venezuela develop a nuclear program, though CNN could not immediately verify his claim.

Still, on Friday, Putin said he and Chavez discussed "new opportunities" for cooperation between the two nations.

Topics of Chavez's discussion with Medvedev included joint Venezuela-Russia naval exercises scheduled to take place in November. Earlier in the week, Russia dispatched a naval fleet of warships to the Caribbean, led by the Peter the Great nuclear cruiser.

After Chavez met with Medvedev, the countries signed bilateral documents concerning energy cooperation, according to the Kremlin.

Journalist Adrian Criscant in Caracas, Venezuela, contributed to this report.

All About Hugo Chavez • Venezuela • Russia