POPAYAN, Colombia (CNN) -- Thousands of Colombian Indians plan to protest government policies on Tuesday in the country's second-largest city, marking more than a week of demonstrations against the nation's free-market economic policies. 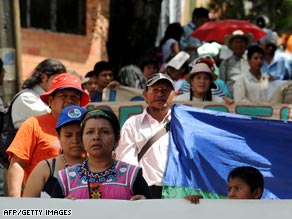 Indians protest against the government on Tuesday in Medellin in northern Colombia.

Indian leaders in the mountains of southwest Colombia announced during the weekend they were gathering as many as 20,000 protesters and would begin to march Tuesday on the city of Cali, an industrial and agricultural hub.

At least two Indians have been killed and more than 80 have been injured in the protests, which began October 10 and have included a blockade of the Pan-American highway. The government says as many as 70 security force members, mainly riot police, have also been injured.

During the past week, protesters throwing rocks and firing sling shots, catapults and Molotov cocktails, have clashed with riot police, who fought back with tear gas, rocks and batons.

The Indians also say the security forces have been shooting at them with rifles and canisters packed with shrapnel. President Alvaro Uribe has denied that police and army forces have been using lethal force against demonstrators, but medics say they have treated scores of Indians injured by bullets and shrapnel.

The protesters allege one of their own, 27-year-old Taurino Ramos, was fatally shot in the head by police. The police have made no official comment.

A formal autopsy was not conducted because the Nasa tribe, to which Ramos belonged, opposes autopsies for cultural reasons.

Press photos of Ramos being carried away from the front lines of the clashes showed him bleeding heavily from his head.

Seven Indian tribes in southwest Cauca and Valle del Cauca provinces launched the protests to coincide with the date of October 12, known in the United States as Columbus Day and in much of Latin America as Dia de la Raza, or Day of the (Indian) Race.

Latin America's Indian communities equate the discovery of the Americas by Christopher Columbus in 1492 as the start of the Spanish colonial invasion, which led to millions of Indian deaths in wars and from disease. The Spanish invaders drove the Indian populations off their ancestral lands and deep into jungles and mountains, as they plundered resources, including gold and silver.

Since then, the Indian population has become an ethnic and economic underclass in Colombia and in most of Latin America. They rank among the poorest sectors of society.

The Indians have called for the government to fulfill previous pledges to give more land to Indian reservations, guarantee better health care and education, and to stop big business and multinational companies from encroaching on their lands.

Under the Colombian constitution, all subsoil rights belong "to the nation," which effectively means the government can, and has, granted mining rights to national and multinational corporations on lands claimed by Indians.

The Indians, whose lifestyle and religion is connected closely with preservation of the environment, are bitterly opposed to unrestricted mining in their territory.

Indian leaders describe their protest as "anti-capitalist." They see their struggle as another reflection of growing worldwide concern over free market economic policies and financial management, which they say were to blame for the recent meltdown in global stock markets.

"The capitalist system our government imported from the United States is a failure. The world is bankrupt," Aida Quilcue, a protest leader, told CNN.

"This shouldn't just be a fight by the Indians but by everyone in Colombia and across the world who rejects this deadly capitalist model."

About 1.3 million Indians divided among 102 tribes or ethnic groups are living in Colombia, the government estimates.

The government argues the Indians are well provided for with more than 66 million acres of reservations.

But Indian authorities say the statistic is misleading since much of the land is jungle, mountain or swamp -- and protected as an environmental reserve. They say almost 500,000 Indians have no land at all.

The highway was conceived in 1923 as a way to unite the Americas. It runs some 29,000 miles (48,000 kilometers) from Alaska to Patagonia at the southern tip of South America -- broken only for a few miles between Panama and Colombia in a lawless region of thick jungle.