LONDON, England (CNN) -- It is an unusual art auction where making money isn't a great concern. But that is the case this weekend when a series of paintings go on the block with the purpose of drawing attention to climate change. 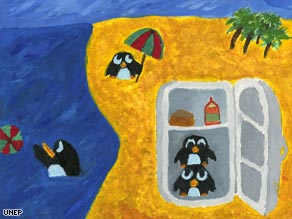 This picture by Andrew Bartolo, 15, of Malta is one of 26 for sale in the UNEP's "Paint for the Planet" auction.

This weekend, 26 paintings with the theme of climate change will be auctioned in New York City to raise money for children most adversely affected by global warming. The "Paint for the Planet" auction is sponsored by the United Nations Environment Program (UNEP) and will spotlight the work of young artists across the globe.

"Half of the world's population is today below 25 years of age," said Achim Steiner, executive director of UNEP. "The auction is a way of communicating their perspective and the auction and the money is in a sense a companion benefit."

Pre-bids have started and early indications suggest that all 26 paintings will be sold for at least the opening bid of $500 apiece.

The paintings are the best of some 200,000 entries received during the past 17 years of the UNEP's annual International Children's Painting Competition.

Entries came from as far afield as Burundi, Armenia, Thailand and Colombia.

"Some of these kids were only seven, eight nine or ten years old when they painted these things", Steiner said. "The imagination and imagery is stunning... and the humor. There's one of a polar bear taking off his costume and it's a polar bear in a bikini."

Penguins also are featured prominently. Fifteen-year-old Andrew Bartolo from Malta secured third place with his picture of penguins frolicking on a beach. Some are tossing beach balls while others sit nearby in a fridge.

Of his picture, Andrew says: "I have painted a scene that, though slightly extreme, gives an insight into a possible future, one where animals lose their homes and are forced to migrate to unfamiliar territories... Due to our wrong decisions, these creatures are suffering just as much as we are or more.

Daniela Melendez, 14, of Colombia strikes a more upbeat note with her painting showing the globe and people harnessing alternative forms of energy.

"With my painting I wanted to tell people that it's easier and better when we work together... we TOGETHER are doing it, together we can work it out," says Daniela.

It's that kind of optimism about the future that the UNEP hopes to propagate through the promotion and sale of the 26 paintings.

Another 26 paintings will join them in a traveling exhibit that will follow climate talks around the world until their climax in Copenhagen in December 2009.

The auction and exhibition are part of the new global campaign launched today; "UNite to Combat Climate Change" calls for a definitive agreement on climate change to be formed at those talks in Denmark.

In conjunction with the campaign, the UNEP has released results of a survey it says highlights how concerned young people are about climate change.

"Children have a way of questioning established wisdom and that is part of opening up new ways of thinking and acting," Steiner said.

"So I think we need to mobilize the energy and the enthusiasm and the commitment and the faith of young people to get involved in these issues."

Live bidding for the paintings starts on Saturday at 8 p.m. ET at the Harvard Club in New York. Eager buyers outside the United States are being encourage to lodge pre-bids or to participate online through eBay.