Rescue continues into the night after Haiti school collapses

PORT-AU-PRINCE, Haiti (CNN) -- At least 50 people have died in a school collapse in in Petionville, near the Haitian capital of Port-au-Prince, officials said Friday night. 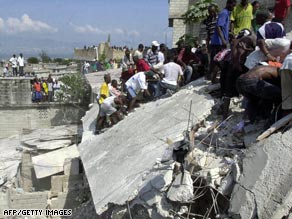 Haitians try to help victims at a school that collapsed Friday in Petionville, near Port-au-Prince.

Rescue personnel planned to continue working into the night to dig out students and teachers buried in the rubble, the Red Cross said.

At least 100 people have been injured, the Haitian Civil Protection Bureau said. The death toll is expected to rise.

Officials said the school could have held as many as 700 people when the collapse occurred at 10 a.m. (10 a.m. ET) Some students were in class while others were in a playground, Haitian media reported.

"We are looking at major casualties here," Claudon said.

He said dozens of students appeared to be trapped inside but couldn't give an exact number. However, he said it was a typical school day and the building had been crowded.

Most of the students at the College La Promesse Evangelique range in age from 10 to 20, he said, but there are younger ones as well. Haitian press reports said the school has kindergarten, primary and secondary students.

"I heard and saw with my own eyes children appealing for help," Preval was quoted as saying on the French language www.haitipressnetwork.com.

"We are taking all necessary steps," Pierre-Louis said. " The government has mobilized to save those who can be saved."

Preval asked residents to stay away from the area so police and rescue officials could do their work unimpeded.

Michaele Gedeon, president of Haiti's Red Cross, said she heard the voices of distraught children as rescuers tried to calm them while she was on the phone attempting to coordinate emergency rescue efforts.

Watch as the Red Cross official describes the scene »

"On the phone, you can hear so many children, you know, crying, crying and saying, 'this one is dead,' 'that one is dead,' " she said.

Claudon said hundreds of bystanders and rescue workers were digging through the rubble, but "what we need right now is heavy search-and-rescue equipment."

Fifty to 60 patients, 30 of them severely injured, were taken to Trinite Hospital in Port-au-Prince, said Isabelle Mouniaman Nara, the head of mission in the capital for Medecins sans Frontieres.

The situation at Trinite "is under control right now," she said.

Trinite is the only hospital open in Port-au-Prince, the group said. The other two, General Hospital and Hospital de la Paix, are closed by strikes.

The school is in an extremely poor part of town, and the roads are nearly impassable, local journalist Clarens Renois said.

A United Nations helicopter was unable to land, Renois said.

"The school is poorly built," said Amelia Shaw, a journalist with United Nations TV who visited the scene.

Renois described the building as "not quite solid" with "weak construction."

The school consisted of two floors with an addition built in the rear over a 200-foot ravine, Shaw said. The steep hillside, she said, is covered with shanty-like housing on both sides.

The disaster occurred when the second floor crumbled onto the first, Shaw said.

A disaster assistance response team from the U.S. Agency for International Development arrived on the scene within hours of the collapse, the agency said in a release.

After assessing the situation, USAID activated its partner the Fairfax County Urban Search and Rescue Team. That team will be composed of 38 personnel, four search-and-rescue dogs and 31,000 pounds of rescue equipment and is expected to arrive Saturday.

The Urban Search and Rescue Team will be accompanied by four additional USAID disaster experts.