MEXICO CITY, Mexico (CNN) -- An engine fell off a Mexican government jet before it crashed, killing the second-highest official in the nation, the Cabinet member in charge of the investigation said Saturday. 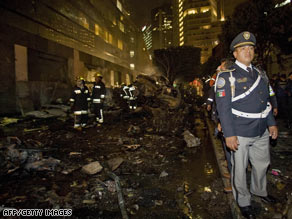 Firefighters at the scene of the crash Tuesday night in Mexico City.

Officials also said they have ruled out the possibility that the crash was caused by a bomb.

"There is no trace of explosives on the plane wreckage or the [crash] site," said Luis Tellez, Mexican secretary of communication and transportation.

Interior Minister Juan Camilo Mourino, former deputy attorney general Jose Luis Santiago Vasconcelos and six others onboard were killed in the crash. At least five others on the ground died, and others were reported missing. Officials said 40 people were injured.

Camilo Mourino and Santiago Vasconcelos had been instrumental in the war on drugs, leading to widespread speculation among Mexicans that drug lords orchestrated the crash. But Mexican authorities have said there is no indication that foul play was involved.

The government Learjet 45 was traveling at 500 kmh (310 mph) when it crashed in central Mexico City as it approached Benito Juarez International Airport.

Gilberto Lopez Meyer, Mexico's director of airports and auxiliary services, said the jet's left engine fell off when the plane was traveling between 250 and 300 kmh (150 to 186 mph), according to Mexico's state-run Notimex news agency.

An examination of the wreckage indicates that the engines were functioning at high speed, Lopez Meyer said.

Tallez said the day after the crash that the Learjet 45 did not explode in the air because when that happens, pieces of the airplane are scattered over a wide area. But the wreckage in this instance was limited to a small area, he said.

Tellez also said Wednesday that the pilot did not report an emergency, Notimex said.

A recording released Wednesday of what Mexican officials said was dialogue between the pilot and the airport control tower did not appear to have an emergency call from the aircraft.

Officials have vowed to make all aspects of the investigation public.