MANAGUA, Nicaragua (CNN) -- Nicaragua's election council will allow a review of the mayoral election in the nation's capital after opponents of the ruling Sandinista Party raised fraud allegations, the council's president said Wednesday. 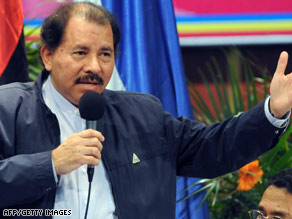 Election council President Robert Rivas announced that ballot tally sheets from Managua would be reviewed after violence followed a resounding victory for the Sandinistas in Sunday's municipal elections.

The PLC and other groups rejected the results and called for an international investigation. The Organization of American States met with opposition leaders Wednesday.

Jose Pallais, a PLC leader, asked for the annulment of the elections.

The Supreme Electoral Council is to verify final results by November 23, but a tally is possible by next week.

"Everyone is waiting for the final numbers," journalist Rosemary Thornton said. "Once they do, there might be violence again."

Election critics cite many irregularities for their allegations, including the government's refusal to allow foreign and local monitors, the delay in tabulating ballots and discrepancies between results certified by election officials and the tallies released on television.

In addition, ballots were found in trash dumps in the municipalities of Tipitapa, which is part of Managua, and Leon. La Prensa newspaper published 40 photographs on its Web site that appear to show discarded ballots and other election material at an unnamed dump.

Ethics and Transparency, a Nicaraguan observer group that was not sanctioned by the government, has reported discrepancies in about one-third of the polls it monitored. The group said it had 30,000 volunteers nationwide monitoring the election.

The monitoring group said the results in more than 100 of the 146 elections were correct, a local newspaper reported.

The Catholic Church asked the electoral council for a recount.

The Sandinista government is led by President Daniel Ortega, a leader in the guerrilla movement that ousted Nicaraguan dictator Anastasio Somoza in July 1979.

Ortega served as president from 1985-90. After three unsuccessful bids, he won the presidency again in 2006.

Sunday's elections were the first since he regained the presidency.