Elderly men to get free Viagra in Mexico City 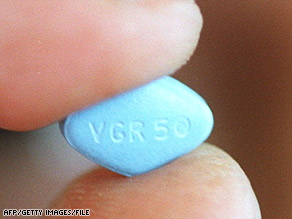 Medications such as Viagra, Levitra or Cialis reportedly will be offered under medical supervision.

"Everyone has the right to be happy," said Marcelo Ebrard Casaubon, governor of the federal district that encompasses the Mexican capital.

"We have to protect people -- senior citizens above all," he said in a statement Thursday. "Many of them are abandoned and lack money. They don't have medical services, and a society that doesn't care for its senior citizens has no dignity."

It cited figures saying that 70 percent of elderly men suffer from the condition.

To obtain the medicine, men must first undergo a "very, very detailed" medical check to screen for and possibly treat ailments such as hypertension and diabetes, the government said.

Centers in Mexico City also will offer a variety of treatment to elderly men and women.

All About Mexico City • Viagra