MEXICO CITY, Mexico (CNN) -- Mexican authorities have detained the country's former drug czar on suspicion that he may have accepted $450,000 a month in bribes from drug traffickers, Mexico's attorney general said Friday. 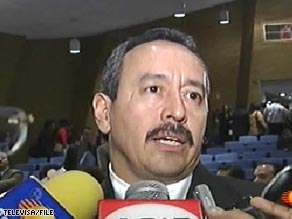 Noe Ramirez Mandujano was in charge from 2006 through August of fighting organized crime in Mexico.

Noe Ramirez Mandujano was in charge from 2006 until this August of the attorney general's office that specializes in combatting organized crime.

Ramirez is accused of meeting with members of a drug cartel while he was in office and agreeing to provide information on investigations in exchange for the bribes, Attorney General Eduardo Medina Mora Icaza said at a news conference Friday.

The arrest was part of an ongoing investigation called "Operation Limpieza," or "Operation Cleanup," the attorney general said. The operation targets officials who may have passed information to drug cartels.

The arrest was announced Thursday night, four days after the house arrest of Ricardo Gutierrez Vargas, the director for International Police Affairs at Mexico's Federal Investigative Agency and the head of Mexico's Interpol office.

Authorities say more than 30 officials have been arrested since July in connection with the anti-corruption operation.

Interpol, which is based in France, announced Wednesday it is sending a team of investigators to Mexico to investigate the possibility that its communications systems and databases may have been compromised, a prospect raised by the arrest of Gutierrez, the top official working with the agency in Mexico.

"A war of master proportions" between authorities and narcotics traffickers and traffickers among themselves has left more than 4,300 dead so far this year, according to the Council on Hemispheric Affairs, an independent research and information organization. By comparison, the council said in a report this week, there were 2,700 drug-related deaths in 2007.

"Homegrown drug cartels operating from both within and outside the country are engaging in a vicious turf war to seize control of major trafficking corridors while engaging in almost open warfare against the mobilized forces of the state," the council said about what it calls "narco-fueled crime."

Drug trafficking in Mexico is a $20 billion- to $50 billion-a-year industry, as much as the nation earns from tourism or remittances from Mexicans living in the United States, said Robert Pastor, a former National Security adviser to President Jimmy Carter and now a professor of international relations at American University in Washington. He has been studying Latin America for more than four decades.

The drug cartels are paying some Mexican officials bribes of $150,000 to $450,000 a month, authorities have said. This in a country where the per capita income is $12,500 a year and one of every seven Mexicans lives in poverty, according to the CIA World Factbook.