ASUNCION, Paraguay (CNN) -- Mexico and Paraguay are the top two marijuana-producing countries in the world, a U.N. report says. 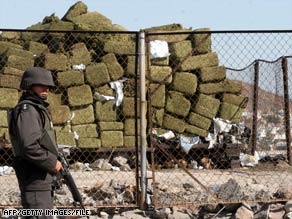 Mexico is the top marijuana producer, a U.N. report says. Here, a member of Mexico's army guards a drug seizure.

While reports of the war on drugs in Mexico are common and well-documented, the fact that tiny, landlocked Paraguay is No. 2 in the world may surprise some.

But most countries in South America, notably Brazil, Argentina, Uruguay and Chile, cite Paraguay as the main source for the marijuana on their market, according to the U.N. Office on Drugs and Crime.

And two of those countries -- Brazil and Argentina -- report an increase in marijuana use due to the ready availability of the crop coming from Paraguay.

The reason marijuana is so abundant in Paraguay is simple, authorities there say: economics.

"Our reality is that we have large crops, large parcels of crops," said Cesar Aquino, the head of Paraguay's antidrug agency. "They don't dedicate themselves to cultivating marijuana because they are narcotraffickers, but because of economic necessity. Compared to the price of a traditional crop, they can make 500 percent more with this."

The U.N. report says marijuana cultivation remains concentrated in North America, where the largest producers are Mexico and the United States.

In Africa, where marijuana production takes place in nearly every country, the largest producer is South Africa (2,500 metric tons), followed by Malawi, Zambia and Swaziland.

In addition, the report says, Nigeria, Ghana and several other West African countries (Guinea, Ivory Coast, Benin and Togo) cultivate relatively large amounts, as do the Democratic Republic of the Congo, Tanzania, Egypt and Morocco.

Paraguay produces more than half of the 10,000 metric tons marijuana grown in all of South America, the United Nations says.

Most of the growers are poor, and they cultivate their crops on nature preserves and private forests near where they live.

While arrests for trafficking and selling drugs are common, Paraguayan authorities say, there is not a single person in jail for growing and cultivating marijuana. Authorities say it's too hard to catch growers.

"The size of an eradication operation involves moving many people and resources," said Oscar Chamorro, a commander in Paraguay's special forces. "That gives [growers] the advantage insofar as detection of our forces coming into an area. Normally, we go in, and they have abandoned the area."

In addition, each eradication raid costs around $25,000, officials say. As a result, the government is asking for help from countries that may be affected by marijuana coming from Paraguay.

Specialists say that marijuana grown in Paraguay is in great demand because of its high potency. In addition, the experts say, Paraguayan soil is excellent for growing marijuana and can yield 6,600 pounds for each hectare (2.47 acres). Many plots can yield more than one harvest a year.

Other facts from the U.N. report released in June: