CARACAS, Venezuela (CNN) -- On the second day of his state visit to Venezuela, Russian President Dmitri Medvedev accompanied Venezuelan leader Hugo Chavez on a tour Thursday of a Russian fleet anchored at a local port. 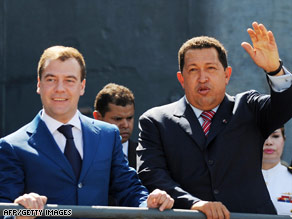 The fleet, including the heavy missile cruise ship Peter the Great, arrived at the port of La Guaira on Wednesday.

Russian and Venezuelan ships are scheduled to conduct joint exercises in Venezuelan territorial waters. It will be their first joint naval exercises in the Caribbean Sea.

Chavez has said the military exercises are aimed at working together to prevent terrorism and drug trafficking and are not aimed at any particular country.

The United States and Venezuela have had a strained relationship since Chavez, a socialist, was elected in 1998.

Medvedev's visit is scheduled to end Thursday afternoon. He travels next to Cuba, another country at odds with the U.S. government.