(CNN) -- Prime Minister Stephen Harper appealed directly to Canadians for support Wednesday, vowing in a nationally televised address on the economy that he will do all he can to halt his opponents from carrying out a no-confidence vote in Parliament -- as planned for Monday -- and forming a coalition government that would replace his own. 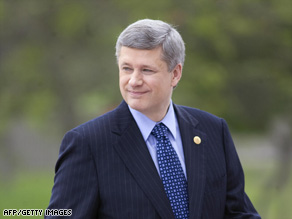 "Unfortunately, even before the government has brought forward its budget, and only seven weeks after a general election, the opposition wants to overturn the results of that election," said the prime minister, whose Conservative Party strengthened its minority position in federal elections on October 14.

The country is undergoing "a pivotal moment in our history," he said, then ticked through a list of efforts his government is making to help the country survive the economic crisis, including personal tax reductions, doubling of spending on infrastructure, injecting liquidity into the financial markets and securing pension plans. iReport.com: Outrage brewing in Canada

"Tonight, I pledge to you that Canada's government will use every legal means at our disposal to protect our democracy, protect our economy and to protect Canada," he said.

Though Harper did not specify what those legal means might entail, his opponents predicted that he would try to dissolve Parliament and wasted no time in voicing their opposition.

The Liberal Party, which lost seats in the October vote, and the leftist New Democratic Party announced plans earlier this week to form a governing coalition with the support of the Bloc Quebecois, which supports independence for French-speaking Quebec.

In a televised address that followed Harper's, opposition Liberal leader Stephane Dion called for a vote of confidence.

He said he had asked Canada's Governor-General Michaelle Jean -- the acting head of state who would call for a new election or a confidence vote -- "to refuse any request by the prime minister to suspend Parliament until he has demonstrated to her that he still commands the confidence of the house."

He said Canada "is facing the impact of the global economic crisis" and must act quickly.

"Stephen Harper refuses to propose measures to stimulate the economy" and his party has lost the confidence of the majority of the House of Commons, he said.

"This means that they have lost the right to govern," Dion said.

He said he and Jack Layton, head of the New Democratic Party, had agreed to form a coalition government to address the economic crisis, and that the Green Party supported it too.

"Coalitions are normal and put in practice in many parts of the world and are able to work very successfully," he said.

"Mr. Harper's solution is to extend the crisis by avoiding a simple vote -- by suspending Parliament and continuing the confusion," Dion said. "We offer a better way. We say, settle it now and let's get to work on the people's business."

The vote scheduled for Monday ought to be allowed to proceed, he said.

In separate televised remarks, Layton accused Harper of having "delivered a partisan attack."

The Conservative Party's plan would create no jobs and protect no pensions, he said.

"He seems to be more interested in his job than in protecting your job," Layton said. "Now, that's simply wrong."

All About Canada • Stephen Harper • Quebec