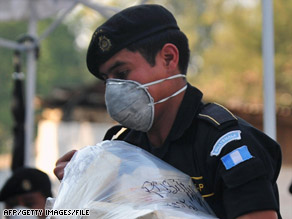 That was made clear Sunday, when at least 18 people were killed in a face-off between members of a local cartel and a Mexican cartel in a frontier zone between Mexico and Guatemala.

"The hypothesis we have is clear, and it is that several cartels here that are operating in Guatemalan territory already have certain alliances with Mexican cartels, specifically the alliances that have been made for the passage of drugs," said Marlene Blanco Lapola, chief of the National Civil Police.

At the crime scene, police found vehicles that were registered in Tamaulipas, a state in northeast Mexico, and documents that indicate the Mexican origins of some of the dead.

According to authorities, pressure that Mexico has exerted on these groups could have led them to use nearby Guatemalan territory instead.

"We are studying the arrival of many Mexicans, specifically members of the Zeta group, who have wanted to come to take advantage of the Guatemalan territory, a situation that we -- as authorities -- will not permit," Blanco said, referring to one group of narcotraffickers.

According to one political analyst, this week's killings are an example of the globalization of crime. He believes that conditions in Guatemala made the country ripe for the establishment of such groups.

"It's no secret to anybody that the institutions in our country are weak, that they lack human and technical resources," said the analyst, Manuel Villacorta.

"Without doubt, organized crime is taking advantage of these evident levels of vulnerability that the Guatemalan institutions present," Villacorta said.

Experts point out that two other events of similar violence have occurred this year in Guatemala, underscoring the fact that the groups feel they are free to act with impunity.

All About Guatemala • Mexico • Drug Trafficking