MEXICO CITY, Mexico (CNN) -- More than 11,500 public servants have been suspended or fined for corruption during the past two years, the Mexican government said. 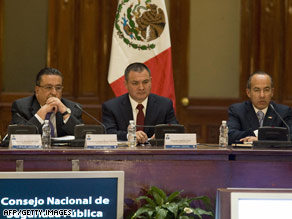 "We have made an important effort to oversee the good use of public funds," said President Felipe Calderon on Tuesday. "We have broken up networks of corruption in Pemex [the state-owned oil company], ... in customs or in areas linked to construction of public works."

Some 40 agents of the attorney general and of the secretary of security also are under investigation for presumed ties to drug cartels.

Although organized crime has penetrated state institutions charged with fighting crime, Calderon said he had a program intended to work on that.

Watch what Mexico is grappling with »

"With Operation Cleanup, we will continue acting against police, agents, public ministers or any servant implicated in corruption who may have crossed over the line to crime."

The problem extends beyond bureaucracy. A poll by the organization International Transparency shows that Mexico is one of the emerging countries where businesses are more open to paying bribes.

In all, 38 percent of Mexican businesses surveyed said they tended to use relationships with friends or relatives to obtain public contracts, and 32 percent said they had bribed politicians and government workers.

"Clearly, this lends itself to corruption," said Jose Claudio Trevino, a senior manager with Ernst & Young in Mexico. Corruption is rampant in the private sector, particularly in deals that involve buying or selling, he said.

According to official studies, more than 100 million acts of corruption are committed in the country each year, and the typical family spends the equivalent of 25 percent of its income on bribes.