Brazil to get nuclear sub technology from France

RIO DE JANEIRO, Brazil (CNN) -- The presidents of France and Brazil are set to sign several bilateral agreements, including a defense accord that would make Brazil the first Latin American nation to possess a nuclear-powered submarine. 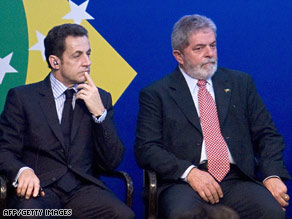 Brazil and Argentina are the only Latin American countries with significant nuclear capabilities.

The agreement would include the transfer of technology that would allow Brazil to assemble 50 EC-725 Cougar helicopters, four conventional submarines and one submarine with nuclear capability as part of Brazil's military modernization process, officials told Agencia Brasil.

Under the accords to be signed by the two presidents, France also would provide Brazil with night vision and remote monitoring technology to be used by the military in the Amazon region, the news agency said.

All About France • Brazil