MEXICO CITY, Mexico (CNN) -- The record number of killings in Mexico continues to climb, with the discovery of eight bodies stuffed in black garbage bags in the southeastern state of Chiapas, near the Guatemalan border, authorities said. 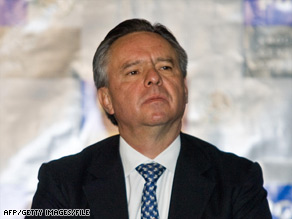 The grisly discovery Tuesday on a road near the town of Tuxtla Chico came two days after nine decapitated bodies and severed heads were found in the state of Guerrero. Officials said Wednesday it is too early to tell whether there is any connection.

The bodies in Guerrero belonged to eight soldiers and one former high-ranking police officer, officials said, while three of the victims in Chiapas have been identified as local merchants.

Amador Rodriguez Lozano, the justice minister in Chiapas, said no motive or suspects have been established.

"It is very difficult to say right now," he said in an interview Wednesday with TV Azteca. "We still don't know. We just started the investigation."

Five of the victims were strangled, and three were shot, Rodriguez said. There were signs of torture.

None of the victims had IDs, officials said.

Rodriguez said the three identified victims were cousins. Two of them ran a business taking merchandise between Mexico and Guatemala, Rodriguez said, while a third owned a local business. Nothing was immediately known about the other five, he said.

The nine bodies in Guerrero were found Sunday in the state capital of Chilpancingo.

Drug cartels fighting off rival traffickers, police and troops increasingly have started using decapitations as a tactic. In another recent instance, the bodies of 12 headless men were found in the state of Yucatan in August.

Violence has reached record levels in Mexico this year. Attorney General Eduardo Medina Mora said earlier this month that organized-crime killings climbed to nearly 5,400, more than double the 2,477 deaths in 2007.

All About Mexico • Chiapas • Drug Trafficking